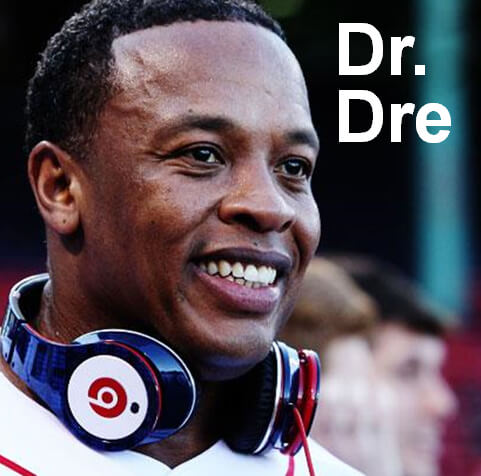 It’s a celebrity world and marketers have to deal with it.

One of the enduring cultural trends is the intrusion of celebrities in almost every aspect of life.

Beats by Dr. Dre had $519 million in revenues last year. It’s the best-selling headphone brand in the over-$100 category.

But Dr. Dre will soon have more celebrity competitors including Nicole “Snooki” Polizzi who created a lot of attention at the Las Vegas Consumer Electronics Show with her sparkled and cheetah-printed headphones and quirky accessories made by iHip.

Snooki joins a long line of celebrities who introduced headphones and earbuds at the CES conference, including Tim Tebow, Nick Cannon and Ro Marley Not to mention Drew Brees, the new brand ambassador for Monster earbuds.

Meanwhile over at Cannes.

Every June, this French Riviera town attracts the cream of the advertising world. This year, Lee Clow, Shelly Lazarus, George Lois and others. You might have expected the media to report on what these legendary executives had to say about an industry that last year, according to Nielsen, invested $557 billion in advertising.

But no. Much of the news out of Cannes were the “celebrities” in attendance. According to USA Today, “Celebrities at this year’s ad festival, the industry’s largest trade show and awards event, include hip-hop artist Sean Combs, lifestyle expert Martha Stewart and comedian Jack Black.”

The same article also mentioned Conan O’Brien who poked fun at the audience with his comment, “Advertisers are scum.” Also, singer Michael Bublé who demonstrated his favorite app, the SleepStream 2 and the band Fun who boasted about We are Fun, a song used in recent Super Bowl commercials. Jack Black promoted his new web series, Ghost Girls. And Sean Combs touted Revolt, his new music-oriented cable TV channel.

But no mention of Clow, Lazarus or Lois.

Just being a celebrity is not enough.

Martha Stewart has 4.3 million Twitter followers, an impressive number considering that Barack Obama has only 32.9 million and the King of the Twitter world, Justin Bieber, has only 40.6 million.

So what has all this Twitter effort brought Ms. Stewart?

Not much. In the past ten years, Martha Stewart Living Omnimedia, Inc. has had only one profitable year (2007) when the company made $10.3 million.

In ten years, Martha Stewart Living Omnimedia, Inc. has had revenues of $2.4 billion and managed to lose $256.3 million.

Martha Stewart is one of the most famous women in the world, with a sterling reputation as a “lifestyle expert.” Yet in a decade, the company she represents has managed to lose more than a quarter of a billion dollars.

Celebrities don’t listen to non-celebrities. Therefore, I hesitate to suggest this to Martha Stewart, but any company incorporating the word “omni” in its name is headed in the wrong direction. A company needs to stand for “something,” not for “everything.”

Celebrity worship is not just a human trait. In his book Brain Bugs, Dean Buonomano tells the story of a chimpanzee colony where the dominant male had hurt his hand and was limping. Soon the juvenile males of the group started to imitate his limp, a form of flattery that would have been unlikely if a non-dominant male had been injured.

In another case, rhesus monkeys were given a choice between a lot of juice or just a little juice plus a peak at a headshot of another monkey. Strangely, they preferred the latter. But this was only true if the headshots were of dominant males. They were willing to sacrifice some juice for pictures of individuals above them in the social hierarchy, but not below them.

Humans do the same. They sacrifice money to look at pictures and read news of the rich and famous in magazines devoted to celebrity watching. If People magazine were a magazine about ordinary people, no one would buy it.

Marketing used to be primarily about products. Today in many categories, it’s more about the celebrities that use the products.

The world has changed. Advertising is not the force it once was. Cannes, the industry’s largest event, doesn’t use “advertising” in its name. It’s the Cannes Lions International Festival of Creativity.

As a general rule, you don’t launch new brands with advertising. You launch them with PR.

PR first, advertising second. PR to build the brand; advertising to maintain the brand once it has been built with PR.

One difference between the two.

Advertising usually involves the promotion of products and their features. Typical headline: “2014 Jeep Cherokee: The best of what we’re made of.”

Having a celebrity CEO can be extremely helpful in the brutal competition in the marketplace. Take the personal computer. Early on, all the big high-tech companies got into the business. AT&T, Burroughs, Dictaphone, Digital Equipment, Exxon, ITT, Lanier, Mitel, NCR, NEC, Siemens, Xerox and, of course, IBM, the company that pioneered the “office” personal computer.

Three years after the launch of the IBM PC, Michael Dell, a sophomore at the University of Texas, launched his own brand of personal computer setting up a classic PR story. David (or rather Michael) versus the Goliaths.

In a reprise of the Old Testament story, it was Michael who won the battle. By 1999, Dell was the world’s largest personal-computer manufacturer.

In our work with startup companies, we usually stress the need for a PR “angle” that can drive publicity. And one of the best angles is the founder.

That’s why in a number of cases, we have worked with clients to change the names of their companies to the founders’ names.

In several cases, we have even encouraged founders to change the spellings of their names in order to own websites. (In today’s digital environment, a company name without the matching website is almost useless.)

Is an individual’s name like “Ford” a better name for a company than a general name like “General Motors?” In the long term, perhaps not.

But in the short term, the individual’s name is much better because it can help drive publicity. (As Henry Ford once demonstrated.)

That’s one reason that early on Michael Dell changed his company’s name from PCs Limited to Dell Computer. And it was the resulting publicity that help to create the world’s best-selling personal-computer brand.

But celebrities can’t solve everything and Dell got off the track the same way Martha Stewart did. But trying to get into everything.

No wonder Dell itself is now for sale to the highest bidder.