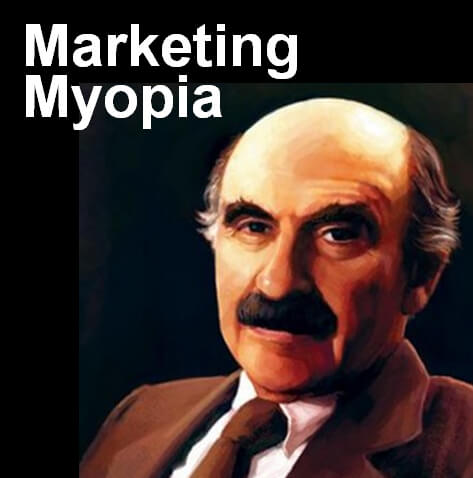 Fifty-three years ago, the Harvard Business Review published what went on to become one of the most-quoted articles ever to appear in any magazine or newspaper.

Perhaps it’s time for a marketing person to point out the myopia in management thinking. A myopia that has undermined companies like Kodak, IBM, Sears, Xerox, Dell, Hewlett-Packard and many others.

Management has fallen in love with brands without realizing that every brand has a potentially fatal weakness.

A brand stands for a category. Once a brand becomes strongly embedded in consumers’ minds, it’s almost impossible to move that brand into another category.

One of the ironies about Ted Levitt’s article is that the strategy he recommended may have contributed to today’s management myopia.

Let me repeat: “ . .  they assumed themselves to be in the railroad business rather than in the transportation business.”

Do you know of any successful “transportation” companies?” I don’t.

And oddly enough, there are successful railroad companies. But how they became successful is a story worth telling.

Ted Levitt was certainly correct in his assessment that the railroad industry was in trouble. Back in 1960, the year Marketing Myopia was published, one of the largest railroads in America was the New York Central.

In 1968, the New York Central merged with its rival Pennsylvania Railroad to form Penn Central, which went bankrupt in 1970.

It’s been my experience that companies are eager to jump into any new category that seems to threaten their own business, when a better strategy might be to do just the opposite.

Which is exactly what the railroad industry eventually did. Instead of being in the passenger-and-freight railroad business like Penn Central, today’s successful railroads are focused on “freight.” And they are very successful.

(In 2009, the business community was shocked when Warren Buffet’s Berkshire Hathaway group bought the 78 percent of Burlington Northern Sante Fe it didn’t already own. But the investment has done extremely well. Revenues are up 49 percent and profits are up 96 percent.)

When you narrow your company’s focus, two things happen, both of which are good. (1) You become more efficient at what your company is doing. (2) You strengthen your brand because it now has a better chance of standing for something.

One company that bought into the marketing myopia doctrine early on was Xerox. In 1969, Xerox spent nearly a billion dollars to buy a mainframe computer company, Scientific Data Systems, which it promptly changed to Xerox Data Systems. Ted Levitt would have been pleased.

In a 1970 Business Week article entitled “Two gee-whiz giants go at each other,”

Xerox President C. Peter McColough said: “Xerox and IBM are the two big companies exclusively in the information business. IBM owns the manipulative data processing part, and we own a part that puts things on paper.”

“But the lines of separation are getting blurred, and it will be harder and harder to distinguish them. Sometime in the 1970s, we intend to be able to say to any big customer, We can handle all your information needs.”

By the time the 1980s rolled around, Xerox’s mainframe computer business was long gone and the company had narrowed its thinking from “information” to “office automation.”

It had high hopes for the 820, its first personal computer. “We think the 820 could accelerate the move to office automation,” declared a Xerox vice president.

“Team Xerox” was the advertising campaign that launched the company’s office automation effort. “We’d suggest talking to a company that offers more than just typewriters. Or just copiers.”

“Only Team Xerox can offer you a complete line of copiers, of Memorywriter typewriters, of electronic printers, of facsimile machines, of computers and professional workstations and an Ethernet network that can tie most of these machines together right now.”

By the 1990s, reality had set in. Team Xerox was disbanded and the financial-services firms Xerox had bought in the 1980s were sold off.

Once again, Xerox was a copier company.

For decades, IBM dominated the mainframe computer business with a market share in the 70 percent range.

With the company’s 1981 introduction of the first 16-bit business personal computer (the 5150, commonly known as the IBM PC), the company was on a roll.

Within two years, the IBM PC was the best-selling personal computer in America. And the media lavished praise on the company and its strategies.

The following year (1984), IBM had profits of $6.6 billion, the largest any company anywhere in the world had ever achieved. That same year, Fortune magazine selected IBM as “the most admired company in America.”

What a great case for another marketing myopia article. “IBM is in trouble today because they assumed themselves to be in the mainframe business rather than in the computer business.”

But that’s a myth. By the 1980s, IBM was into every aspect of the computer business. Mainframes, midrange, personal computers, copiers, telephones, satellites, software, you-name-it. Ted Levitt would have been pleased.

Why did IBM get into trouble? Conventional wisdom faulted IBM’s “mainframe mentality” and their failure to follow the computer development into other categories.

But I think it’s the opposite. The company only made progress when it got out of the computer hardware business, except for its dominant position in mainframes.

Over the years, IBM has sold its copier business to Kodak, its Lexmark printer business to an investment firm, its networking hardware business to Cisco, its disk drives to Hitachi, its personal computer business to Lenovo and its digital printer operations to Ricoh.

Which left the company with mainframes.

What’s a mainframe anyway? It’s the electronic nerve center of every major corporation in the world. Companies may not be buying a lot of mainframes, but they certainly depend on them to keep their companies running efficiently.

In order to serve the needs of these mainframe-dependent companies, IBM has made a major push into services and software. In 2002, IBM bought the consulting and technology services unit of PricewaterhouseCoopers.

Last year, services and software accounted for 80 percent of IBM’s revenues. And the company’s net profit margin was an astonishing 15.9 percent.

Did advertising agencies decide they were in the “communications” business and start to publish magazines and newspapers? Or operate radio and television stations?

Actually the opposite happened. Most advertising agencies are more successful today because they got out of the media-buying function and focused on their core strength.

Creating the strategies and messages that build brands.