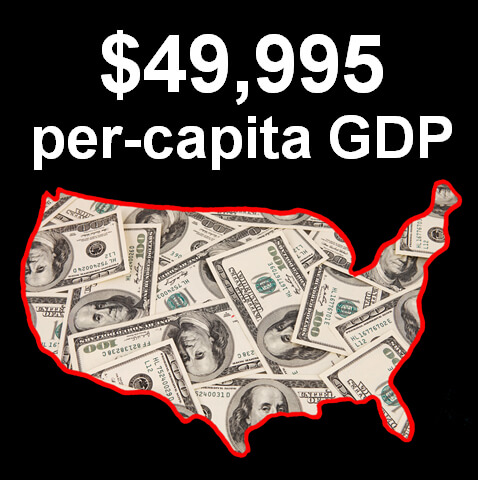 Why is America one of the world’s wealthiest countries?

According to the World Bank, America’s per-capita gross-domestic product America is $49,965.

A thousand miles to the south is the country of Nicaragua where the per-capita GDP is just $4,

072. Why does the average American enjoy an income that is more than 12 times one of its neighbors?

Most Americans probably agree with Barack Obama when he said to the United Nations: “I believe that America is exceptional.” Its ability to “stand up for the interests of all” is special.

That might be true in the political world, but not in the economic one. The truth is, the larger the population, the wealthier the country.

It’s no secret. In his book “The Wealth of Nations” published in 1776, Adam Smith had the answer: “The division of labor leads to specialization, expertise, dexterity, and machinery, thereby producing greater wealth.”

But there is a limit to specialization, as Adam Smith pointed out: “As it is the power of exchanging that gives occasion to the division of labour, so the extent of this division must always be limited by the extent of the market.”

In other words, the larger the market, the more specialization and the greater the wealth.

You will find many rich people in a big city because wealth is created by specialization. And specialization can only happen when the market is large enough.

Why are some small countries rich?

Here are the values of each country’s exports as a percentage of the country’s gross domestic product.

What are America’s exports as a percentage of gross domestic product? Just 14 percent.

Why are some big countries poor?

Adam Smith had the answer to this question, too: “The statesman who should attempt to direct private people in what manner they ought to employ their capitals . . . assume an authority which could safely be trusted to no council and senate whatever.”

In the past, both China and India suffered from this exact problem, decades of government control of business. But relatively recently, both countries have adopted free-market principles. The result have been astounding.

over the past decade has been 7.7 percent. (Compare that to America’s 1.7 percent.)

What makes a country wealthy is specialization. But do companies know this? I think not.

Computer software is by far the most dynamic industry in the world. Its growth has been absolutely staggering. You might think a company like Microsoft would be happy to specialize in computer software. But no.

As Steve Ballmer, former CEO, said recently: “The thing I regret is that we didn’t put hardware and software together quicker.”

Really? Will Microsoft’s 2012 introduction of its Surface tablet computer and its 2013 acquisition of Nokia’s phone business (for $7.2 billion) follow in the footsteps of its 2006 introduction of the Zune portable media player? History suggests that they will.

And just this year, Google spent $3.2 billion to purchase Nest Labs, maker of the Learning thermostat and the Protect smoke-and-carbon-monoxide detector. Apparently the long-term goal is to develop smart-home systems.

Another software company dipping its toes in hardware is Facebook with its $2 billion acquisition of Oculus VR, a virtual-reality company.

Have these acquisitions helped Dell? Its revenues in fiscal 2013 (its last year as a public company) were $56.9 billion, less than the $57.4 billion recorded in fiscal 2007.

Meanwhile over at Hewlett-Packard, the same scenario was taking place. In 2008, the company acquired Electronic Data Systems for $13 billion. In 2011, H-P acquired Autonomy for $11 billion.

What makes a country wealthy is specialization. It seems strange that many companies don’t practice this same idea.