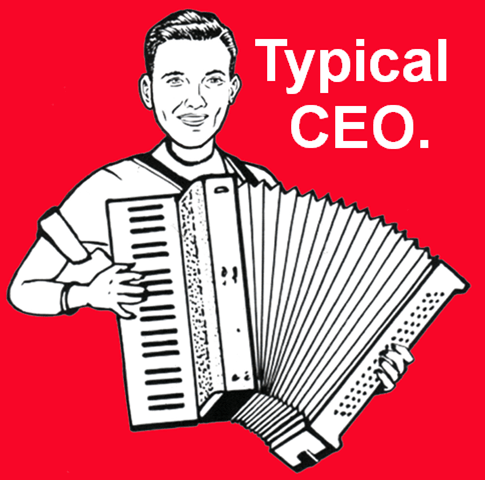 What do chief executives have in common with accordion players?

Hewlett-Packard plans to split in half, separating its PC and printer businesses from its hardware and services businesses. According to CEO Meg Whitman, the two companies would be “a lot more nimble, a lot more focused.”

This is not the first time Hewlett-Packard split in half. Fiftee

n years ago, the company spun off its test and measurement equipment in a company called “Agilent Technologies,” a name picked to connote “agility.”

What has H-P been doing in the last 15 years?

In 2003, Hewlett-Packard bought Procter & Gamble’s IT unit for $3 billion. Also that year, in a single press conference, then CEO Carly Fiorina introduced 158 new products along with a budget of $300 million to promote them. (Look what Apple did with the introduction of just three new products, the iPod, the iPhone and the iPad.)

In 2007, Hewlett-Packard bought Opsware, a computer software company, for $1.6 billion.

In 2009, Hewlett-Packard bought 3Com Corp, a manufacturer of networking gear, for $2.7 billion.

These nine major acquisitions cost the company $64.4 billion. In addition, Hewlett-Packard made 58 other acquisitions in the 15-year time period. (Not counting 2014, H-P made only $49.4 billion in net profits since the Agilent spinoff.)

Apparently it’s time to spit the company in half and start a new round of acquisitions. Just like an accordion player, Hewlett-Packard expands and contracts its businesses on a regular basis.

“The question I get most often is, What is H-P?” said Meg Whitman recently and then added “It’s a communication problem.”

When you look at the numbers, you can see why Hewlett-Packard is concerned. In the past 10 years, the company’s net profit margin after taxes was just 4.0 percent.

Compare that to its spinoff partner, Agilent Technologies, which has had a net profit margin in the same period of 15.2 percent. So there obviously is a big advantage in being “a lot more nimble, a lot more focused.”
Dell has taken a similar route.

In the past six years, Dell has spent $18 billion on 40 acquisitions, including three major ones.

In 2008, Dell bought EqualLogic, a maker of storage area network systems, for $1.4 billion.

In 2012, Dell bought Quest Software, a supplier of systems management and security software, for $2.4 billion.

These acquisitions have not done much for Dell, a company that has been going sideways ever since 2007 when the company had $61.1 billion in sales. In 2012, the last year before Dell was taken private, sales were down to $56.9 billion.

What’s a Dell? Who knows?

Dell once had a strong position. Computers sold direct to businesses only. This strong position, in my opinion, is what made Dell the world’s largest maker of personal computers from 2003 to 2006.

Instead of expanding in many directions, why didn’t Dell focus on PCs and hammer its PC leadership with a massive advertising program? The way Samsung is hammering its global leadership in smartphones.

In 2006, Dell was the PC market leader, but its share was only 16 percent. Sooner or later, you can expect the personal-computer market to be dominated by two major brands.

In the long term, duality.

You can count on it. In the long term, two brands will dominate each major category. Coke and Pepsi. Duracell and Energizer. Colgate and Crest. Home Depot and Lowe’s. Walmart and Target. USP and FedEx. Boeing and Airbus. Sotheby’s and Christie’s.

Look at the smartphone market. Last year, Samsung had a 31 percent global share and Apple had a 15 percent share.

A host of other smartphone brands are fighting for market share. BlackBerry and Motorola from North America. LG, Huawei, Lenovo, Xiaomi from Asia. Yet these brands are lost in a cloud of dust behind the two market leaders, Samsung and Apple.

The No.3  smartphone brand has a market share of just 5 percent. Everybody knows who the two smartphone market leaders are, but nobody knows what brand is No.3.

Look at the tablet-computer market. Apple has a 27 percent global market share and Samsung has a 17 percent market share.

It’s not a product problem. It’s a perception problem. Most people assume the two leading brands must be the best of the lot, so they pick and choose between them. And the also-rans fall farther and farther behind.

If your brand is not one of the two market leaders, then you have a long-term problem. And the solution to your problem is always the same. Narrow your focus so you can stand for something.

The surge of spinoffs.

“Suddenly, breaking up is the thing to do,” said the headline of a recent article in The New York Times. Spin-off Research, a newsletter, predicts that 2014 is likely to top the record 66 corporate spinoffs reached during the technology bubble of 1999 and 2000.

The question is, Will it last? Or is this just another detour from management’s long-term strategy of expanding its brands.

One of the ironies of the Hewlett-Packard situation, according to USA Today, is that the company has also been contemplating “a possible merger with data-storage giant EMC.”

So, Hewlett-Packard, what is it going to be? A spinoff or a merger?

As a helpful guide to corporate executives who never let marketing principles get in the way of their management decisions, here is a little refrain they can use.

Thanks to synergy, we can expand our brand.

Thanks to focus, we can contract our brand.

So whatever we do,

We can always be true

To one of the two.

Now if I can find an accordion player to add the music, maybe I can use the bit in my next speech.