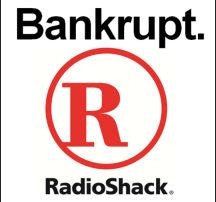 What we can learn from the RadioShack disaster.

“Inside Radio Shack’s Collapse” is the headline of a six-page cover story in Bloomberg Businessweek last month. Why RadioShack bite the dust? Let’s take a tour of the Businessweek story to find out.

RadioShack has spent the last 20 years trying on a number of identities, none of which has been a convincing fit, and testing the patience of investors, employees, and most markedly, customers.

Managers were constantly rearranging the stores, so employees had trouble keeping track of where things were.

Attempts to squeeze maximum value out of each person who walks into one of its locations has made shopping or working at RadioShack an irritation.

It didn’t have to be this way. There are still potential RadioShack customers out there. Some need HDMI cables and aren’t willing to wait for a delivery from Amazon; others have a professional need for a disposable cellphone. And then there are the tinkerers, who once served as RadioShack’s core consistency.

The name versus the claim.

From management’s point of view, every brand has two separate identities: (1) The name, and (2) The claim, or the position the brand is trying to establish in the minds of its prospects.

And management has no problem separating the two. RadioShack might be the brand’s name, but there’s no reason the chain can’t sell thousands of products that have nothing to do with radio sets.

Yes, there is. From the consumer’s point of view, the name and the claim are locked together. Burger King sells hamburgers. Pizza Hut sells pizza. Taco Bell sells Mexican food. And Radio Shack sells radios?

The latter doesn’t make sense to most consumers, so many of them have no idea what RadioShack does sell.

RadioShack was founded in 1921 as a store for ham-radio operators. As a business, the company reached its peak in the 1970s during the CB radio craze.

In 1977, RadioShack introduced one of the first personal computers, the TRS-80. And very successfully, too.

The Apple 2e, the Commodore Pet and the RadioShack TRS-80 were the three leading personal-computer brands. The TRS-80, often called “Trash 80,” even outsold Apple machines for a number of years.

The success of TRS-80 should have raised alarms bells in the halls of RadioShack management. What are we doing selling personal computers in a radio store?

The solution? Change the name. In retrospect, there would have been a perfect name for the company to use instead of RadioShack.

The name is never the problem.

Why didn’t Businessweek mention the weakness of the name “RadioShack” as one of the chain’s problems?

Because editors, reporters and chief executives seldom concede that a brand’s name can be the crux of the problem. It’s always something else. The product. The service. The price. The people. The packaging. The distribution.

I have yet to read a story in Businessweek, or any management publication, that faults Kodak for using a film photography name on digital photography products.

Or Xerox for using a copier name on a mainframe computer product.

Or IBM for using a mainframe computer name on a personal computer product.

Or Nokia for using a cellphone name on a smartphone product.

The claim: “At Al Jazeera English, we focus on people and events that affect people’s lives. We bring topics to light that often go under-reported, listening to all sides of the story and giving a ‘voice to the voiceless.’ Our viewers trust Al Jazeera English to keep them informed, inspired, and entertained. Our impartial, fact-based reporting wins worldwide praise and respect.”

Then there’s the name, Al Jazeera. In America, at least, what has more effect on potential television viewers, the name or the claim? Al Jazeera or “its impartial, fact-based reporting that wins worldwide praise and respect.”

Almost any marketing person would have told Al Jazeera that the name wouldn’t work in America. Why didn’t Al Jazeera give its American network a different name?

It’s a shame. Management will change a claim without a second thought. But when it comes to changing a name, management’s answer is almost universally, “No.”

We have argued for name changes with the top managements of many large companies. I can’t remember winning any of these arguments.

Then there’s The Shack.

Back in 2009, RadioShack spent a reported $200 million on a television and digital campaign to re-introduce itself as “The Shack.”

That was just in the advertising, of course. The signs outside the stores still said “RadioShack.”

Was that going to solve the company’s positioning problem? Just ignoring the negative word “Radio” and focusing on the word “Shack.”

Names are important for reasons marketing people often forget. Names have credibility that claims do not.

If a street sign says “Lakeview Drive,” consumers assume the street will have a view of a lake. Otherwise, why did they call it, Lakeview Drive?

If the brand name is Gorilla Glue, consumers assume the glue must be very strong. Otherwise, why did they call it, Gorilla Glue?

If the brand name is Diet Coke, consumers assume it’s not going to taste as good as regular Coke.

And anything called “High-fructose corn syrup” is not going to good for your health.

Names are important. RadioShack had six chief executives in the last ten years. Why didn’t any of them figure out that the chain needed a new name?