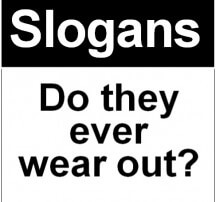 How long should a slogan last?

Back in 1999, Advertising Age selected the top 100 advertising campaigns of the 20th century. Out of the top 100, how many do you think are still being used today? Just the 11 campaigns listed below.

Be honest. Didn’t you recognize all of these advertising campaigns? I thought so. A singular message used repeatedly over a long period of time is almost certain to burn a hole in consumers’ minds.

Let’s look at some of the 89 top advertising campaigns no longer being used today.

Why in the world did Volkswagen introduce larger, more expensive cars when the brand owned a powerful position in the mind at the low end? Thus leaving an opening for low-end brands like Kia and Hyundai.

Volkswagen expanded its line presumably to sell more cars. But that’s not what happened. Last year Hyundai (725,718) and Kia (580,234) sold far more vehicles in the American market than Volkswagen (366,970.)

“The pause that refreshes.”

Believability is an important component of an advertising message. If it’s not believable, it’s not going to work.

“The pause that refreshes” is believable while Coca-Cola’s current campaign “Open happiness” is not.

“You deserve a break today.”

In 1971 when McDonald’s launched this campaign, only about 40 percent of married women between the ages of 25 and 54 were in the workforce. Today, about 75 percent are.

You might think “You deserve a break today” would be even more relevant today than it was four decades ago.

Instead the brand currently uses “It’s Miller time,” a slogan linked to a totally different idea (what working men do at 5:00pm) and a different beer (Miller High Life.)

The famous Clairol hair-coloring advertisement first ran in 1957. But it’s an idea that could have exceptional power today. “Hair color so natural only her hairdresser knows for sure.”

Pepsi-Cola continues to fall behind Coca-Cola. So what is Pepsi’s current advertising slogan? Who knows?

Why not go back to the one campaign that has a message that millennials can really relate to. “Why drink what your parents drank? You’re the Pepsi Generation.”

What if Burger King continued down the “have it your way” path? Instead of taking care of the few customers who asked for something special, they did away with their assembly lines and made every hamburger from scratch.

Today, Burger King might look more like Five Guys or one of the other better burger chains. Instead of just another McDonald’s knockoff.

By the way, what is Burger King’s current slogan?

If you are old enough, who can forget Clara Peller and the “Home of the Big Bun.” It’s a joke, but it’s also a memorable idea that positioned Wendy’s as a step above Burger King and McDonald’s.

But isn’t that the position Wendy’s wants to own today? And what advertising slogan is Wendy’s currently using to establish that step-above position? I don’t know, do you?

Adam Aron, a marketing executive that Advertising Age twice named as one of the 100 best in the country, told me that one of the secrets of his success was that he would study the history of a company and then try to resurrect a campaign that had worked in the past.  (He’s now CEO of a major American corporation so there must be a lot of merit in his approach.)

Why is this seldom done? One reason is that an advertising agency can’t win an award with an old advertising slogan.

But that’s not the only reason. Every new marketing manager wants to make an impact on his or her organization. And the best way to do that is to either hire a new advertising agency or create a new advertising campaign. (Preferably both.)

The damage digital has done.

With the arrival of the Internet, the battle for consistency and longevity has taken a turn for the worst.

Instead of developing a “big idea” in the creative department and then turning over the campaign to the media department to execute, we have reversed the process.

Now we start with the digital medium and try to figure out what messages to use. Engagement is today’s buzzword.

In Ad Age recently, Rance Crain quoted a Sony digital marketing executive as follows: “ . . the days of coming up with one ‘mind-blowing’ creative idea are over. Today we’d rather have hundreds of small lightweight campaigns that are all used to generate engagement.”

And instead of creating one story for a brand, we are letting the digital medium create hundreds of stories.

Is this approach working?

But aren’t Coca-Cola and McDonald’s in trouble today? I think so.