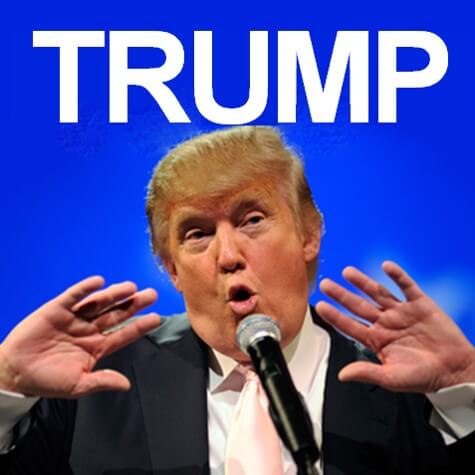 Donald Trump kicked off his Presidential campaign by attacking Mexican immigrants. And the whole country was in an uproar.

In spite of these and other developments, a USA Today poll has Trump in first place with 17 percent of likely Republican voters versus Jeb Bush with 14 percent. (No other candidate was in double digits.)

From nowhere to a virtual tie for first place. How did Donald Trump do that? By focusing on a single issue.

The mistake most politicians make.

Winners stand for something. What did Barack Obama stand for in the 2008 Presidential election? Change.

Change you can believe in was one of the most-powerful political slogans ever developed.

What did John McCain stand for in the 2008 Presidential election? Can anyone remember John McCain’s slogan? And he spent $358 million on his campaign.

What did Mitt Romney stand for in his 2012 Presidential campaign? And what was his slogan? He spent $433 million on his campaign.

It’s hard to remember either slogan because neither candidate had the courage to devote his entire campaign to a single issue.

Big brands stand for a lot of things.

Well, you might be thinking, big successful brands stand for a lot of different things. Marketing experts even recommend this approach.

Wrote David Aaker in “Building Strong Brands:” The basic philosophy was that a brand is more than a single claim. In fact, it needs to have from six to 12 dimensions; they should include more than attribute dimensions, and they need to be prioritized.

Consumers, however, are not focused on the dimensions of a brand. What consumers really care about is finding the best brand to buy in each category. And how do they do that? By buying the best-selling brands.

Don’t the better brands win in the marketplace?

That’s why the best position to own is leadership and the best advertising to run is a campaign that constantly reinforces a leadership position.

If you’re not the leader, however, developing a strategy that includes six to 12 dimensions will guarantee you will never become the leader.

BMW became the luxury-vehicle leader in the American market by focusing on driving. And BMW lost its leadership by switching to joy. All the other dimensions were meaningless.

The Donald Trump of the 1996 Presidential election was Steve Forbes who focused his campaign on the flat tax.

His chief rival for the Republication nomination was Senator Bob Dole. Early polls had Dole at 40 percent and Forbes in second place at 15 percent. Forbes won in the Delaware and Arizona primaries and Time magazine put him on its cover.

Unlike Dole, he has a single, clear message, Mr. Flat Tax, shellacked onto his forehead, wrote Time magazine.

Bob Dole won the nomination, but lost the election to Bill Clinton.

Dole needed to do what Donald Trump and Steve Forbes did. Focus his entire campaign on a single issue.

A second try for Forbes.

Four years later, Steve Forbes made a second try for the Republican nomination. But he apparently misread the results of 1996. He assumed his loss was caused by his single-issue campaign.

So he broadened his 2000 message to include almost everything near-and-dear to social conservatives including his opposition to abortion and his support of prayer in public schools.

Instead of The flat tax, the new Forbes slogan was Americans for hope, growth and opportunity.

Instead of broadening support, new second campaign did just the opposite. In spite of spending more money on his second campaign than he did his first, Forbes never came close to the position he occupied in his 1996 campaign.

The Steve Forbes of the 2012 Presidential election was Herman Cain. His 9-9-9 Plan would replace all current taxes (including the payroll tax, capital gains tax and the estate tax) with a 9 percent business transaction tax, a 9 percent personal income tax, and a 9 percent federal sales tax.

With the launch of his 9-9-9 Plan, Herman Cain surged in the polls.

No.1 by a landslide in the TeaCon Midwest straw poll with 77 percent of the votes.

No.1 in the National Federation of Republican Women straw poll with 48 percent.

No.1 in a Fox News poll with 24 percent. Mitt Romney was in second place with 20 percent.

It all fell apart when several women alleged he had engaged in sexual harassment. Cain and his wife denied the accusations, but Cain, citing the toll the allegations had taken on his family, suspended his campaign.

If there is going to be a meaningful rival in either race, one or more of the Presidential hopefuls have to do what Donald Trump has done. Focus their entire campaign on a single issue.

But not in the marketplace.