Does the watch on Tim Cook’s watch measure up to Steve Jobs’ standards? 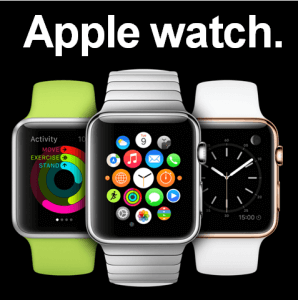 The signs are not good. What reason does Apple have for not disclosing watch sales on its latest financial returns?

I can think of one reason. They’re not good.

Tim Cook says otherwise. “We made the decision back in September not to disclose the shipments on the watch, and that was not a matter of not being transparent, it was a matter of not giving our competition insight on a product that we worked hard on.”

There seems to be four problems with the Apple watch.

(1) An accessory, not an independent device.

Convenience was a major reason for the success of the iPhone. No longer did you need to carry around a laptop computer, an MP3 player, a camera, a GPS device and a cellphone. You could handle all these functions in a single device that could fit in your pocket or pocketbook.

The Apple watch seems to be moving backwards. Now you have to carry two devices. Not a good direction.

On the other hand, an Apple watch with a single primary function might make a lot of sense. Perhaps a wristphone, a device focused on phone calls only. A 21st-century version of Dick Tracy’s 2-way wrist radio.

In other words, instead of developing a new accessory to enhance the performance of the iPhone, develop a new brand for people who don’t want to carry an iPhone.

(2) Not first in the category.

Leaders are almost always brands that were first in the mind. (Not necessarily first in the marketplace.) Lipton in tea. Nescafe in instant coffee. Domino’s in sugar. Morton’s in salt.

He’s right about the first high-capacity MP3 player, the Creative Nomad Jukebox. But that line-extended brand name was weak and the Creative product went nowhere. As a result, the iPod was first is the mind. A thousand songs in your pocket.

The iPhone was the first touchscreen smartphone, clearly a new category as the rapid decline of the BlackBerry demonstrates.

The iPad was the first “tablet computer,” but the category name was previously used by Microsoft and others to describe laptop computers with detachable keyboards. Apple made a mistake in not giving the iPad a new category name.

Names are important. The iPod, the iPhone and the iPad. Three brands that made Apple the world’s most-valuable company. Instead of a fourth brand name, whey did Apple call its new smartwatch, the Apple watch?

If a company wants to line extend one of its brands to capture a small share of an existing market, a line-extension name might produce modest results.

Line extensions are rampant in corporate American because CEOs, in particular, are big believers. Shortly before opening BN.com, Leonard Riggio of Barnes & Noble said to Jeff Bezos of Amazon.com: “You’re doing a fantastic job, but we’re going to kill you when we launch.”

(Currently, Amazon is worth $251 billion on the stock market and Barnes & Noble is worth $1.7 billion, not exactly a killer number.)

Or as Jack Welch, CEO of General Electric, said when the company opened GEfinancial.com: “The big, old guys are going to beat the daylights out of the pure-play dot-commers.”

Google, Facebook, Twitter, Uber, Airbnb, LinkedIn, Pinterest, Snapchart and many other pure-play dotcommers seem to be doing quite well. And the big, old guys seem to be missing the boat. Even IBM is moving sideways today.

The iPod was introduced with a single model.

The iPhone was introduced with two models: 4GB and 8GB.

The iPad was introduced with one model, although 27 days later Apple introduced the iPad 3G model.

Yet Apple introduced the Apple watch with 38 different models. Does this make any sense?

Apple Watch Edition has eight models, ranging in price from $10,000 to $12,000. Celebrities like Beyoncé, Kanye West, Rapper Drake and Karl Lagerfeld have been spotted wearing the expensive Apple models. But few people can afford ten-thousand-dollar watches that might become obsolete in a few years.

How much is an old iPhone worth?

Confusion is the enemy of branding.

When you launch a new brand, you need keep things simple. After consumers have become aware of your brand and its features, then you can add additional models to broaden the brand’s appeal.

But not in the launch phase.

Take the vodka category. Smirnoff was launched in the American market in the year 1933. Today, Smirnoff is the best-selling distilled-spirit brand in the world.

In America, Smirnoff is available in 32 flavors plus its “classic” vodka. But it obviously didn’t start that way. It started with one flavor and then introduced additional flavors only after it became successful. (After 82 years, Smirnoff is still five flavors short of the 38 Apple watch models.)

No one knows whether the Apple watch will become another iPod, iPhone or iPad. But if history is any guide, the odds are not good.

Tim Cook is not following the game plan devised by Steve Jobs.