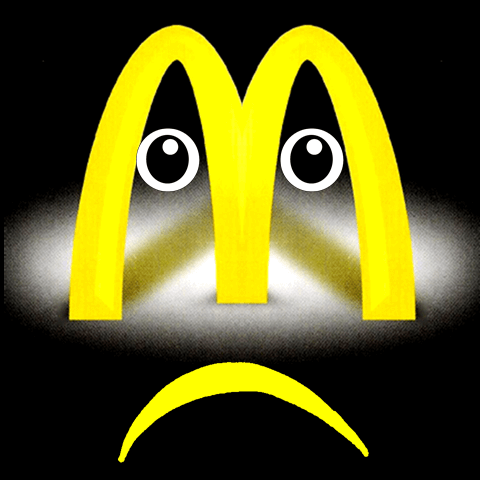 Decades ago, I was kicked out of a Young Presidents’ Organization seminar for claiming that line extensions were destroying the McDonald’s brand.

It’s too late to get back into that YPO meeting, but recently I got some proof to back up my claim.

McDonald’s is in trouble.

Earlier this year, its chief executive was fired amid a barrage of negative publicity. Franchisees, in particular, are unhappy. “They accuse the company of ignoring their concerns,” according to a recent article in BusinessWeek, “on everything from bloated menus to ever-more-costly kitchen equipment to wages for counter workers.”

Today, of course, a typical McDonald’s has more than 100 things to eat while a typical In-N-Out Burger has the same four items it started with.

If In-N-Out Burger were a national chain with a better name, its lead over McDonald’s might be much greater.

Forgetting what made them famous.

Eight years later, the McDonald brothers realized that most of their profits came from hamburgers so they closed down their carhop drive-in and after renovations reopened with a simple menu of just three items to eat, plus shakes and drinks, a total of 11 menu items.

The carhops were eliminated to make McDonald’s a self-service operation. That was the key idea that created today’s fast-food industry. No waiters or waitresses.

Maybe McDonald’s needs to do today the same thing they did 67 years ago. Analyze their business and focus on their most popular and profitable items. My guess it would be hamburgers, cheeseburgers and French fries as well as the soft drinks that go along with them.

It’s funny. For “expanding” McDonald’s, Ray Kroc is considered a marketing genius while the media mostly ignores Richard and Maurice McDonald’s brilliant idea of “narrowing the focus” and creating the fast-food industry.

McDonald’s was the first national fast-food chain, not just the first hamburger chain. Aggressive expansion to 14,350 units in America alone has allowed McDonald’s to dominate the category in most of the communities it serves.

Leadership is such a powerful position it can withstand decades of marketing mistakes. Yet companies almost never equate their success to their leadership positions. It’s always attributed to better products and better service.

So how will McDonald’s cope with its current difficulties? You know the answer to that question: Expansion.

Expand the breakfast menu to lunch and dinner. (But won’t that slow down service later in the day?)

Once the largest retailer in America, Sears in now in 16th place. (And that includes Kmart, part of Sears Holdings.)

Sears was relentless in expanding its business. Over the years, Sears bought the stock-brokerage firm Dean Witter, the real-estate company Coldwell Banker and Allstate Insurance. Sears even launched Discover, its own credit card.

Eddie’s master stroke? Why does the business press almost always see “expansion” as a winning strategy and ignore the time bombs that are almost certain to go off later?

Yahoo was the first major search engine and once was worth $140 billion on the stock market. (It’s now worth $27 billion, thanks in part to its holdings of Alibaba stock.)

But search wasn’t good enough for Yahoo. So it rapidly made many acquisitions and turned them into Yahoo Mail, Yahoo Games, Yahoo Groups, Yahoo Pager, etc.

Since Marissa Mayer joined the company as CEO in 2012, Yahoo has made 50 acquisitions, including Tumblr for $1.1 billion. But Yahoo revenues continue to fall. Here are annual revenues for the past seven years.

You know you have a good strategy when you have a single-word answer to the question, What’s a Yahoo? That answer used to be, Search.

Today, Google owns “search,” Larry Page and Sergey Brin’s “master stroke” that made the company worth $427 billion on the stock market.

Marissa Mayer uses the acronym Mavens to describe the company’s new strategy. Here is how to dissect the word.

Let me suggest a better strategy and a better acronym. “F.”