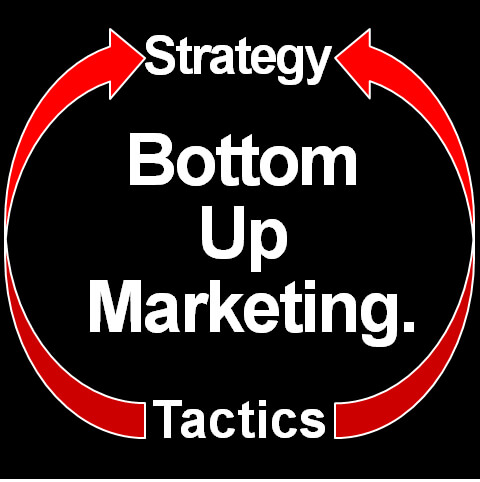 Big companies, in particular, believe in strategy first, tactics second. They pay their boards of directors substantial sums of money to set company strategies. It’s hard to find a corporate executive who doesn’t believe that strategy should come first.

I disagree. In my book (Bottom-Up Marketing published in 1989 by McGraw-Hill) tactics comes first. Not strategy.

Strategic goals that can’t be achieved.

That’s the biggest problem faced by corporations today. Creating strategies that don’t lead to tactics that can work. A typical example is the launch of Quaker Muller yogurt.

PepsiCo, owners of Quaker Oats and other brands, decided they wanted to get into the rapidly-expanding yogurt business. So they formed a joint venture with the Theo Muller Group, a well-known European yogurt producer.

The launch of Quaker Muller yogurt followed what I call the principles of strategy first, or top-down marketing.

Principle No.1: Keep an eye open for any market that is experiencing rapid growth.

The yogurt market certainly qualifies. Thanks to Chobani and the rise of Greek yogurt, the category has become a $6.2 billion business.

Principle No.2: Build a team or a joint venture with people or companies that have experience in the market.

“The Theo Muller Group,” said PepsiCo’s CEO Indra Nooyi, “is a tremendous partner whose deep dairy expertise has allowed our joint venture to enter the U.S. market with a delicious product that our consumers absolutely love.”

Furthermore, according to the company, “PepsiCo brings scale as the largest food and beverage business in the U.S. and has leading innovation-driven research and development programs, a robust go-to-market system, and superior marketing and brand recognition across its portfolio of 22 billion-dollar brands.”

Principle No.3: Take advantage of what you already own in the mind.

While Muller is relatively well-known in Europe, it’s virtually unknown in America. To fix that problem the Muller/PepsiCo venture added the Quaker trademark to the yogurt brand.

As PepsiCo said in its press release, Quaker is “one of the most trusted brands in the world and is known for wholesome breakfast and snack foods that provide nutritional benefits throughout the day.”

Principle No.4: Launch the brand with a massive advertising program.

That’s the problem with “Strategy first, tactics second.” By the time the venture reaches the tactics stage, the opportunities to develop a strong marketing program are lost. The agency’s hands are tied to decisions made up front at the strategy stage.

So Muller Quaker yogurt was launched with the slogan, “The European for yummy.”

So where is there a position in the mind for a brand that’s “European for yummy?”

The end of the story.

Just last month, PepsiCo announced it was exiting its joint venture with the Theo Muller Group that led to the launch of Muller Quaker yogurt in 2012.

Employees of the joint venture will pay the price of Muller Quaker’s demise. Because in a big company, the strategy is always right. The failure is in the tactics.

Instead of a top-down approach, we recommend just the opposite.

Principle No.1: Find an idea that is different.

Companies spend most of their time and energy trying to develop better products or services. That seldom works. All it does is to provide research and development services for market leaders who are quick to copy your better product or service.

Fage was the first Greek yogurt in America, but didn’t hammer the idea on its packages on in its advertising. Fage assumed that consumers would find its yogurt to be thicker, creamier and tastier with less sugar and more protein than regular yogurt. But a benefit without a feature is a difficult sell.

On the other hand, you can sometimes sell a feature without an obvious benefit. What’s the benefit of Evian water from the French Alps, or Fiji water from the islands of the same name? Features create mental benefits in consumers’ minds. Benefits that may or may not exist in the products themselves.

Principle No.2: Once you find an idea that can work, commit your entire brand to support that idea.

Marketing strategy is like military strategy. A good general goes down to the front to find a tactic that will work. Then returns to headquarters to develop an overall strategy to exploit that tactic.

In the Battle of France, the German tactic was to exploit the “seam” between the British Expeditionary Forces to the north and the French armies to the south. The strategy was to commit the bulk of its panzer divisions to an attack through the Ardennes in the heart of that seam. Six weeks later, the battle was over.

Even though the English and the French had a superiority of force (3,142 tanks to the Germans 2,580 tanks), they lost the battle because of the enemy’s superior tactic.

Many big brands have been built exactly this way. Dell became the world’s largest seller of personal computers by selling direct to businesses only.

Principle No.3: Launch the brand with PR, not advertising.

Advertising is a great tool for maintaining a brand’s position in prospects’ minds. But advertising is not very efficient in putting a new brand in those minds.

Why is Donald Trump leading in the race for the Republican nomination? Because he is by far the best-known candidate. And what made Trump well-known? It wasn’t advertising. It was PR.

Principle No.4: Keep your brand focused.

After a company becomes a big success, this is the principle they usually forget. Instead, they start to practice “top-down marketing.”

What did Dell do after its success selling personal computers direct to businesses? It moved the Dell brand to the consumer market. Remember Ben Curtis and the slogan, “Dude, you’re getting a Dell?”

You might assume that big companies with billions in the bank, with their large and talented work force and their enormous research & development efforts, would be the clear-cut leaders in building new brands. But they’re not.

Microsoft, founded by a college dropout, became the largest computer software company in the world. Not IBM.

Amazon, founded by Jeff Bezos (with no experience in retailing), became the largest retailer on the Internet. Not Walmart.

Look at how the media industry has developed over the years. From newspapers to magazines to radio to television and now the Internet.

You might think the media conglomerates, the companies that dominate newspapers, magazines, radio and television would also dominate the Internet.

Facebook, founded by a college dropout, is the most-valuable Internet brand in the world, worth $296 billion on the stock market.

And, of course, Facebook was launched with PR, not advertising.