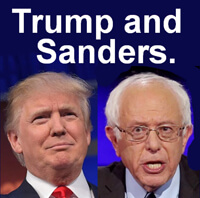 All that is necessary for evil to triumph is for good people to use poor marketing strategies.

Edmund Burke’s famous epigram (with a slight revision) illustrates the importance of good marketing in the current primary battles.

How can an outsider with no political experience (and a flaky business record) become the leading Presidential candidate in the Republican primaries?

Even harder to understand is the Democratic primaries. How can a relatively-unknown Senator from the second-smallest state do so well in competition with the world’s best-known woman? And Bernie Sanders is not even a Democrat.

Own a word in the mind.

When I was running an advertising agency, we used to check the positions of clients by calling people on the phone and asking a simple question.

I’m going to name a few brands and I would like to know what single word you associate with each of the following brands.

The expensive watch market, of course, is dominated by Rolex. And yet, I wonder how many marketing consultants have suggested that Rolex introduce less-expensive watches in order to broaden its market?

What about Bernie Sanders?

What word did Bernie build his campaign around?

Typical quote: In 2008, the taxpayers of this country bailed out Wall Street because we were told that they were ‘too big to fail.’ Yet, today, today, three out of the four largest financial institutions (JP Morgan Chase, Bank of America and Wells Fargo) are nearly 80 percent bigger than before we bailed them out because they were too-big-to-fail. If a bank is too-big-to-fail, it is too big to exist.
Taxing Wall Street, according to Sanders, would help him pay for free college tuition and other socialist programs he proposes.

Surprise. At last count, that unknown one-issue candidate has 44 percent of the pledged Democratic delegates.

Is history repeating itself?

What’s happening in the Democratic race seems to be a repeat of what happened eight years ago.

In 2008, Hillary Clinton faced a relatively-unknown politician serving his first term in the Senate. But Barack Obama had the better strategy.

Change we can believe in.

In other words, Barack Obama was a one-issue candidate.

So what was Hillary Clinton’s slogan in 2008? Actually, she used three slogans, typical for a multiple-issue candidate. Do you remember any of them? Probably not.

(1) Experience you can count on.

So what is her slogan in 2016? She started with Hillary for America and had since shifted to Fighting for you. Neither of which stands for anything specific in voters’ minds.

Two weeks later, Donald Trump was No.1 in the polls.

At last count, the outsider with no political experience has 51 percent of the pledged Republican delegates.

One of the most potent tactics in a marketing campaign is controversy. If you can find an idea that is contentious, you can often build a brand around that idea.

Controversy creates news. And news build brands. So far, Donald Trump has received more than six times as much PR as his nearest opponent, Ted Cruz.

What works in political brands also works in consumer brands. Take BMW, for example. Back in 1974, BMW was a relatively-unknown imported car. (No. 11 among European imports.)

The following year, BMW launched its iconic advertising campaign. Headline of the first advertisement:  The ultimate sitting machine vs. the ultimate driving machine.

Most executives would have refused to run such an ad. Mercedes-Benz, our competitor and compatriot, builds sitting machines? What about the 300SL?

What defines the other 20?

At the start of this year’s election cycle, there were 22 candidates. Three Democrats and 19 Republicans.

Take the 18 Republicans who are not Donald Trump. Do you remember any of their political slogans? Here are three you might remember because they are just plain silly.

According to press reports, Jeb Bush spent $130 million on his campaign, including $10 million for consultants. He even tried a second slogan Jeb can fix it, another equally bland idea.

Here are the other 15 slogans.

From hope to higher ground.

Leadership you can trust.

Ready to be commander-in-chief on day one.

Reigniting the promise for America.

We must do right and risk the consequences.

What a political candidate needs to do is to make the election about the candidate. Not about his or her opponent. And the best way to do that is to focus on a controversial issue that is bound to incite the candidate’s opponents to strike back.

If I was a Republican candidate running for President, I would use the slogan, Let’s run the country like a business.

That would create instant howls from every anti-corporation activist. The corporations are taking over America.

And I would hammer the government’s inefficiencies. In the past 44 years, Amtrak has lost $45 billion. In the past eight years, the Postal Service has lost $52 billion. And last year, the Social Security system lost $84 billion. What company could stay in business if it operated like the government?

If I was a Democratic candidate running for President, I would know that after eight years of Barack Obama, the Republicans would hammer away at the need for “change.” Something like Donald Trump’s slogan, Make America great again.

So my slogan would be: Keep Obama’s revolution alive.

And I would use the initials of the slogan as a chant (KORA, KORA, KORA) the audience could use in all my rallies.

The times, they are a changin’.

Years ago, a brand could become successful just by being well known. Today, that’s not enough. To be successful today, a brand has to be well known for something.

That’s true in politics as well as in products.