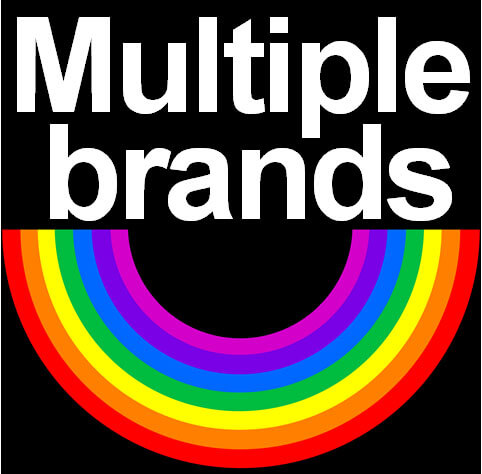 It’s time for CMOs to focus on the major marketing issue of the 21st century.

Ever since the turn of the century, the agendas of chief marketing officers have been focused on: (1) The Internet, and (2) Big data.

It’s time for a change.

CMOs should devote their time to what I believe is the major marketing issue of the 21st century.

In a world where technologies are rapidly changing, a single-brand company is at a strong disadvantage.

Look at IBM, once one of the largest, most-profitable companies in the world. In recent years, IBM has spent $30 billion on acquisitions, including $5 billion last year alone.

In 1981, IBM had a great opportunity to become a multiple-brand company when it introduced the first 16-bit personal computer. But instead of giving the new product a new brand name, the company hung the IBM name on its PC.

In the next 23 years, IBM lost a reported $15 billion on personal computers, finally selling its PC operations to Lenovo for $1.75 billion.

But not with the Apple brand name. Apple called its advanced personal computer “Macintosh,” a brand name that still resonates with high-end PC buyers today. Then, of course, Apple introduced three more new products all with new brand names: iPod, iPhone and iPad.

Even Apple doesn’t always follow Apple. The company made a major mistake in my opinion by not giving its new smartwatch a new brand name.

Consider Lenovo, the company that bought IBM’s personal-computer operations. Included in the deal was “ThinkPad,” IBM’s model name for its laptop computers.

You might have thought that Lenovo (a weak name in the English language) would have used ThinkPad as a brand name for its computer line. But no.

Single-brand thinking is rife in the boardrooms of corporations worldwide. So ThinkPad became just another Lenovo product.

ThinkPad, in my opinion, could have become the dominant personal-computer brand worldwide, but not with the Lenovo name. In the first quarter of this year, Lenovo had just 20 percent of the PC market, just barely ahead of Hewlett-Packard’s 19 percent.

Furthermore, Lenovo is barely profitable. Last year its net profit margin was just 1.8 percent which was actually an improvement over previous years. In the ten years since acquiring IBM’s personal-computer operations, Lenovo has had a net profit margin of just 1.5 percent.

In those same ten years, Apple has had a net profit margin of 22.1 percent.

With Apple’s success with multiple brands, you might think high-technology companies would rapidly follow suit. But they didn’t.

Take the smartphone, perhaps the most revolutionary new product of the 21st century. After the success of the iPhone, 11 major high-tech companies also launched smartphones: BlackBerry, HTC, Huawei, Lenovo, LG, Micromax, Motorola, Nokia, Samsung, Sony and Xiaomi. Now how many of those companies used new brand names for their smartphones?

Take the electric vehicle, which could turn out to be one of the most-successful new products of the 21st century. The interest is certainly there. Almost 400,000 people have made a thousand-dollar down payment on the Tesla Model 3.

And most of the major automobile companies in the world have introduced electric vehicles: BMW, Fiat, Ford, General Motors, Kia, Mercedes-Benz, Mitsubishi, Nissan and Volkswagen. Now how many of these companies have used a separate brand name for their electric vehicles?

In other words, everything gets thrown together under the Dell name.

(Even worse, putting two well-known brand names together like “Dell” and “EMC” is a major mistake. When Coca-Cola bought Glaceau for $4.1 billion, should the company’s name have been changed to Coca-Glaceau?)

So why does Dell want to emulate IBM instead of Apple?

It didn’t work in the past.

Michael Dell, chairman and CEO of Dell pitched the end-to-end strategy as a boon to customers who want a single partner that can do everything.

We’ll see. It’s been our experience that business customers as well as consumer customers want to do business with the best company in each category and not with one company that sells everything.

Go back in history. Dell has tried the single-brand strategy in the past with little success.

Dell became enormously successful by focusing on selling personal computers direct to business customers only. So what did Dell do next? They expanded the Dell product line to include consumer personal computers, retail distribution, MP3 players, television sets and other products. (Remember the television commercials: Dude, you’re getting a Dell.)

What should Dell do?

What should Dell do with its new collection of companies? Instead of marketing the package under the Dell brand name, we would recommend that the Dell name be used only for the company’s line of personal computers and servers.

The EMC brand name could be used for the company’s enterprise infrastructure services.

The VMware brand name could be used for virtualization software and services.

Dell’s Secure Works could be merged with EMC’s RSA unit and marketed under the RSA brand name.

When you marketing everything under one brand name, the way Dell and IBM are doing, it’s very difficult to make that brand name stand for any singular idea.

Unless you consider “mess” a singular idea.