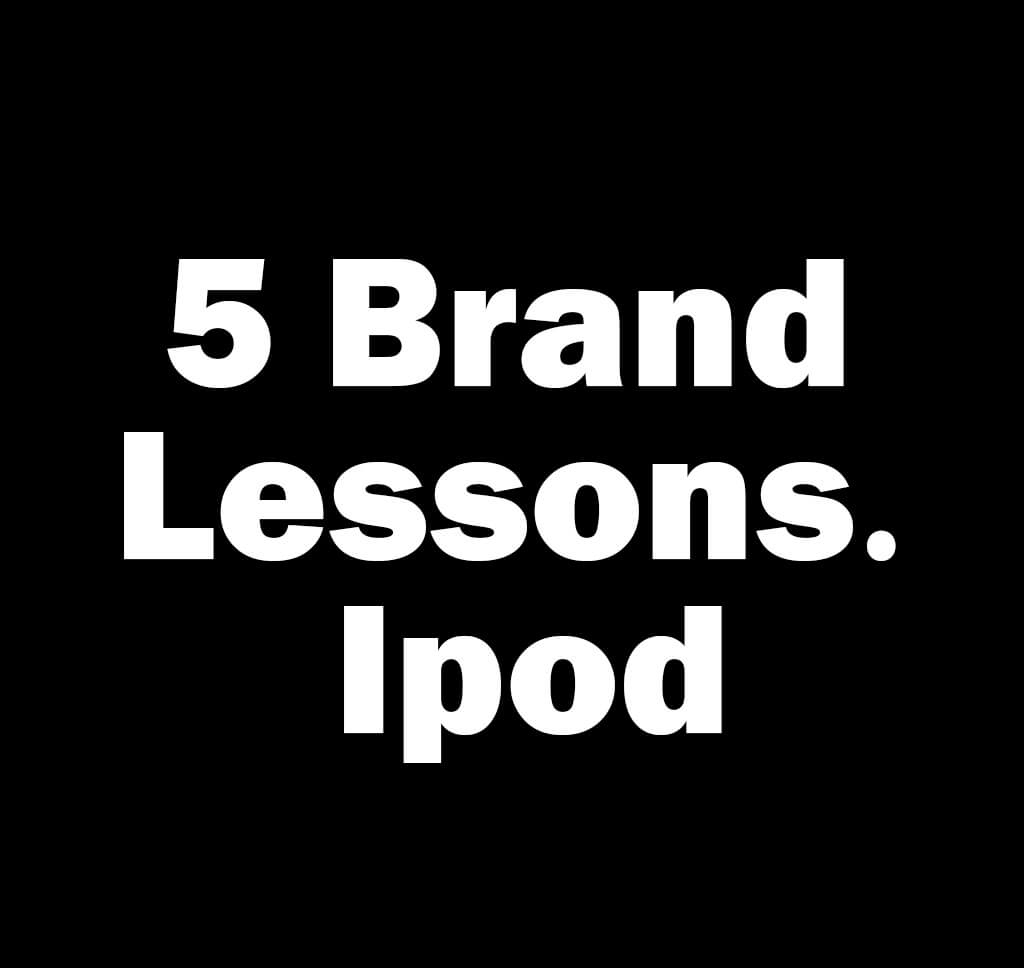 The End of the iPod leaves 5 Brand Lessons Behind

By Michael Brandtner and Jens Hansen

On Tuesday May 10, 2022, Apple announced that the last remaining model of the iPod, the iPod Touch, now only will be available while stocks last. For Apple, the iPod has served much more than being just another product innovation. It was the innovation that laid the foundation for the iPhone. With that legacy, it has to a large extent served to build the base for Apple’s current brand and corporate success and wealth.

Lesson 1: Focus on Setting Up a New Category

All these devices were MP3 players with built-in flash memory cards offering limited storage. Playtime and the quantity of music that could be stored and played was constrained. As an example, the “Diamond Rio” with its 32 megabytes of music storage offered thirty minutes of playtime or the equivalent of about ten songs.

Into this MP3-player-world, Apple introduced the iPod: An MP3 player with a small hard disk drive and a storage capacity of 5-gigabytes. As a result, many came to see Apple as the first mover in the new category of MP3 players with a built-in hard disc.

Lesson 2: Focus on Creating a Perception

But the true first-mover, however, was the “Creative Nomad Jukebox”: A MP3 player with a 6-gigabyte memory. Creative Technology launched the device in September 2000, more than a year before the iPod saw the light of the day.

Only what matters most in marketing is not to be first on the market, but to be first in the minds of the customers. At the end of the day, it is of little value to be the number one on paper if you don’t achieve to become the number one in the prospects’ perception and minds.

Today a good example of this is the market for electric cars: For years, the Nissan Leaf was the world’s best-selling electric car and consequently the undisputed market leader in terms of global sales and market share. In the minds of the customers however, Tesla has always owned the perception of being the leading electric car brand in the world.

From this point of view, it was of minor importance for Steve Jobs that the iPod didn’t enter the market first with a hard disk MP3 player. What mattered, was that the iPod entered as the first MP3 player in the mind. The iPod positioned itself in the minds of the prospects as the device that could store and play more music and songs. Steve Jobs played a major role as a person representing the iPod in terms of communication. Just the way Elon Musk has done for Tesla.

The choice of the name and the slogan were two extremely important factors for the iPod to achieve leadership in the mind. Many new innovations fail because their chosen brand names are more difficult and harder to remember than the competitors’ names. Not so the iPod: Just compare the two names “iPod” and “Creative Nomad Jukebox”.

But not only the name is important – so is the slogan. A slogan should ideally sum up the unique position of the brand in an easily remembered way.  Apple used the simple statement “1000 songs in your pocket”. A slogan, that not only clearly differentiated the iPod from all the other MP3 players holding a flash memory card, it also expressed the iPod’s core advantage in a verbally graphic and memorable way.

But what is equally or if not more important than creating a verbal differentiation, is to shape a visual differentiation. In case of the iPod, Jobs didn’t just focus on the product design itself, he made use of creating visually striking and differentiating accessories: White headphones and white cables. A very unusual move at the time when the standard was to use black headphones and cables. Jobs went against the industry standard and wanted iPod user to stand out of the crowd.

Important learning: When introducing a new category, make sure that it is visually different from the older categories and that it really stands out to be seen. Take the market for energy drinks. In 1987, Dietrich Mateschitz had the brilliant idea not to launch the energy drink Red in Bull in a traditional 33 cl aluminium can. Instead, he chose the very unusual and visually different 25 cl slim can. This clearly increased the perceived difference of Red Bull and separated and made it stand out visually from all other soft drinks at this time.

Lesson 5: Focus on Being Patient

In retrospect, the iPod often is referred to be a so-called “overnight success”. But that is not true at all. Sales statistics show that the iPod sold “only” 125,000 units in the first quarter after its introduction in the autumn of 2001. Not much in comparison to the first iPhone that sold 270,000 units in the first weekend after its launch in 2007. By September 2003, Apple finally had managed to ship and sell its first million iPods. In 2004, sales accumulated to 4.4 million iPods. The real breakthrough came in 2005: By the last quarter of 2005, Apple had sold a total of 22.5 million iPods. In 2006, this number rose to 39.4 million and by the time the iPhone was released in 2007, more than 100 million iPods had been sold worldwide.

The lesson to be learnt: Many good ideas risk failing due to the impatience of management expecting too much in a too short period of time. In this context it makes sense to take another look at Red Bull. In the first year in 1987, Red Bull’s turnover totalled 800,000 euros. The second-year sales doubled to 1.6 million euros and in the third year these reached 2.8 million euros. A plausible thesis: If Red Bull back in the day had been owned by a big soft drink company, the brand most probably would have been discontinued by the end of 1988 – at the latest.

Today, with a turnover of more than 7.8 billion euros, many companies would love to own the Red Bull brand.

Key outtake from this lesson is that new ideas and brands always should be given the necessary time to develop.

In Memory of the iPod

Even if the iPhone currently has become the most important product or rather the most important brand for Apple, one should not forget the role the iPod has had in taking Apple out of the computer niche business back in 2001. A manoeuvre that ultimately paved the way for the iPhone.

Seen in that light, even if it is now being phased out, the iPod deserves to have a permanent shrine of honour at Apple and in the world of brands.