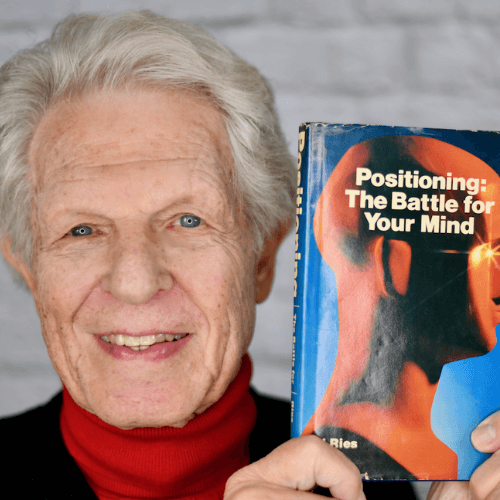 The Guru has Passed Away, But His Legacy Lives on

Al Ries, the world’s most influential positioning strategy guru, founder of Positioning Theory, first author of “Positioning: The Battle For Your Mind,” and founder of Ries Positioning Strategy & Consulting, has passed away peacefully at his Atlanta home in the United States at the age of 95 on October 7, 2022.

Mr. Al Ries has lived a legendary life and is known as a legendary guru in the American business world. Born and raised in a typical middle-class family, he joined the U.S. Navy right out of high school. After serving in World War II, he returned to the United States and studied mathematics at DePauw University, a top liberal arts college. After graduation, he joined the advertising department of General Electric, then the world’s largest corporation.

His work at GE led him to develop a keen interest in marketing and strategy, and he began to explore the meanings and truths behind their concepts, which he eventually devoted the rest of his life and career to. In 1963, Mr. Al Ries founded Ries Consulting in New York City to serve clients with the concept that “the mind is the ultimate battlefield of business competition” and came up with the ROCK concept, the prototype of the Positioning Theory. After several years of development and improvement, Mr. Al Ries and his partner Mr. Jack Trout formally introduced the Positioning Theory in 1972.

Mr. Al Ries, along with Warren Buffett, Steve Jobs, and Peter Drucker, was selected as one of the “Top 10 Global Business Gurus” as the representative of Positioning Theory by prestigious American media outlet. He was also inducted into the “Marketing Hall of Fame” in 2016 by the American Marketing Association (AMA), who praised his pioneering Positioning Theory for its broad and far-reaching impact on the global business community.

Mr. Al Ries has condensed his lifelong research and thoughts on business strategy, branding, and marketing into 12 business classics, including “Positioning: The Battle for Your Mind”, “Marketing Warfare”, “Focus: The Future of Your Company Depends On It”, “The Origin of Brands: How Product Evolution Creates Endless Possibilities for New Brands”, “The 22 Immutable Laws of Marketing”, and “Positioning in the 21st Century”. His books have been translated into 47 languages and sold more than 10 million copies worldwide. They have become a must-read for more and more generations of entrepreneurs and managers, and the Positioning Theory has become the most influential strategy and marketing concept for companies worldwide.

Mr. Al Ries has witnessed the rise of American companies and American brands during his lifetime, and at the same time, he also foresaw the future of China and Chinese brands. He believed that China has become the focus of the world, with every action making the global headlines, and that brands are the key to China’s economic transformation. He was confident in Chinese companies and Chinese brands, believing that China’s potential is unimaginably enormous and that the future of Chinese brands is promising, and the Positioning Theory could play a major role in the process of building Chinese brands and transforming the Chinese economy,

Thanks to Mr. Al Ries’ confidence in the huge potential of China and its business brands, since 2007, Ries Consulting has been building a China team to help Chinese companies build Chinese brands. Mr. Al Ries loved China and was passionate about studying traditional Chinese philosophy. He believed that the positioning concept and traditional Chinese culture have much in common, which is why he was fond of quoting famous Chinese thinkers Confucius and Lao Tzu in his books. In his speeches around the world during his lifetime, his most frequent quote was one by Lao Tzu: ” One who boasts of himself will not succeed; one who thinks himself superior cannot be a leader. “

Compared with the time when Positioning Theory first came out in 1972, the world has undergone rapid and profound changes. This is why Mr. Al Ries devoted his entire life and energy to promoting the development and legacy of the theory so that it could evolve and move forward with the times. Its dissemination and practical guidance are done by a team of professionals around the world. Thanks to these efforts, the Positioning Theory has become an evergreen classic in the global business world with extraordinary vitality.

In daily life, Mr. Al Ries was a complete gentleman; in his work, he was a great and wise man. In his life of more than 90 years, he never stopped thinking, always observing the business world with a keen and unique perspective, and constantly exploring and practicing at the forefront of the business world.

The guru has passed away, but his legacy lives on. Today, the concept that “the mind is the ultimate battlefield of business competition” proposed by the Positioning Theory has become the consensus of the corporate world. How to win the minds of prospects has become an eternal strategic issue for companies pursuing excellence. In remembrance of Mr. Al Ries, the Ries team will continue to promote, practice and develop the Positioning Theory under the leadership of Ries Global Chairman Laura Ries and Global CEO Simon Zhang.

In honor and memory of Mr. Al Ries, we have decided to establish the “Al Ries Global Strategic Positioning Award” in his name to encourage companies and entrepreneurs who have made outstanding contributions to the practice and promotion of the Positioning Theory, and with whom Ries Consulting is ready to work together to promote sustainable business development.

Though the journey ahead is long and arduous, with sustained efforts, we will reach our destination and embrace a brighter future.