Wal-Mart in the middle of Elle! 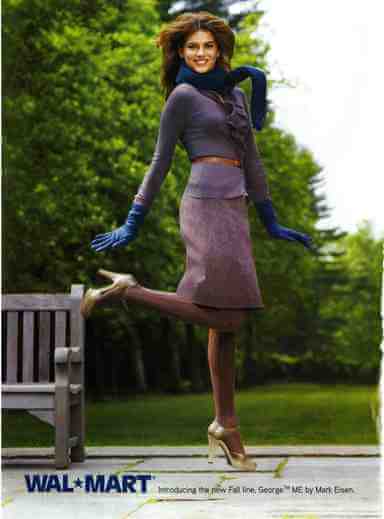 Last week I was getting my hair colored at a salon and to pass the time I was flipping through Elle magazine which covers high fashion and haute couture brands like Chanel and Dolce & Gabanna. Most of the advertising is for thoes same brands and others of a similar caliber.

Then right in the middle of the magazine I was hit with this surprise. A multiple page advertising spread from Wal-Mart! Yes, always low prices Wal-Mart.

Now I wrote last summer about the world’s largest retailer making a foolish play into the fashion world but I am shocked to see them still beating that dead horse. I searched the Elle website for the words Wal-Mart and not 1 mention came up. On the other hand, Chanel yielded 64 results.

You can see why, just look at the outfit on this model! I am not a fashion maven by any means, but this is the best they could do? Believe me it stood out like a sore thumb in the magazine. Who are they kidding?

But even the best outfit would not change the perception of Wal-Mart in the mind. In the mind, Target owns the low-cost fashion idea, but they are not even silly enough to advertising in the high-fashion rags.

Wal-Mart is a strong brand, a powerful company and global leader. They own a powerful idea in the mind. But it is not fashion, it is "always low-prices."

When you are as big and as well-known as Wal-Mart all the money in the world spent on advertising is not going to change your position in the mind. You can’t buy credibility and authencity. You have to earn that.