When someone attacks your brand, how do you fight back? With advertising? Forget it.

In addition to being the tool of choice for brand building, PR is also the way to defend your brand against negative PR.

Why doesn’t advertising work to defend your brand? There are two reasons which both come down to credibility. First advertising itself is not a credible medium. Advertising is a self-serving message from the advertiser. And all consumers know this and treat it with a grain of salt. That is why advertising is only effective if you are reminding people what they already know. Advertising is not effective when trying to change an opinion in the mind.

Second, issue advertising itself not credible. Why pay for something you could get for free, thinks the reader. If the company really had a credible defense the media would cover the story in the editorial pages. Running an ad stating your position says the media refused to run your side of the story. Not a good message to send.

So what about Wal-Mart? There is no doubt that the Wal-Mart brand has been under attack for years by unions, politicians and several consumer groups to name a few of its critics.

The world’s largest retailer has simply become a victim of its own success. Protesters usually target the leader for industry woes. Why go after the little guy when the big fish will get you bigger headlines?

Wal-Mart initially ignored its critics. Being as powerful as Wal-Mart and being isolated in Bentonville, they felt they could. But to keep a brand healthy you need a steady dose of positive PR. 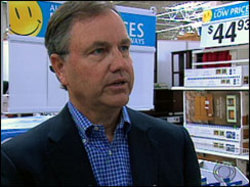 Wal-Mart has finally got into the game in a big way. I was really pleased to see Lee Scott on the CBS News with Katie Couric on Wednesday. Having Scott interviewed on the hottest new news program on television was a brilliant move and a long time coming. You know you’ve been bad when they start the interview with “in a rare interview with the CEO…”

No CEO should be giving rare interviews. It is a CEO’s #1 job to be giving interviews all the time. The CEO is the spokesperson for the company and its brands. Look at other successful companies, you would never hear the words “in a rare interview” being said about Howard Schultz of Starbucks, Bill Gates of Microsoft, or Meg Whitman of eBay. Because these CEOs know, that PR is part of their jobs, perhaps the most important part. And positive PR keeps these brands healthy despite the occasional attack.