Will the Apple iPhone be the straw that breaks the camel’s back on convergence?

Check out this fantastic article from Monday’s Wall Street Journal All in One? by Jason Fry. I disagree with Jason on the iPhone, he still has hope for this convergence mirage. 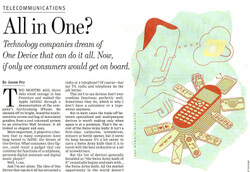 But when the iPhone flops and his hopes are dashed once again like has happened with the cellphone/music player, the universal remote and tv/pc before it, I think Jason along with many others will finally be unsold on convergence.

Some classic quotes from the article:

“The idea of One Device that can do it all has attracted a lot of hype over the years, only to have the candidates run aground on the rocks of consumer indifference”

“Convergence sounds better than it is..think jack of all trades, master of none.”

“In most cases the trade-off between specialized and multipurpose devices is worth making only when space is at a premium. That’s the secret of the Swiss Army knife: It isn’t a first-class corkscrew, screwdriver, scissors or bottle opener, but it earns its keep because it’s a lot easier to carry a Swiss Army knife than it is to travel with the best corkscrew or a set of screwdrivers.”

“Take the universal remote, which should have taken over the world — except that figuring out how to make one remote do the job of four or five is so complicated that few users can ever master one. You’re better off digging for the right remote than staring helplessly at the lone remote.”

The truth is: It is a lot cheaper, easier, better and more efficient to buy different devices for different functions.

Most people prefer and buy each of these devices separately: a cellphone, an iPod, a BlackBerry, a digital camera, a laptop, a desktop, a HD television, a TiVo, a satellite radio, a Nintendo Wii, a DVD player.

If convergence were the key to brand building and future business success than the coffee shop (the classic restaurant that sells everything) would be the most powerful brand in the world.

I don’t disagree with the prediction that initially Apple will sell quite a few iPhones. Steve Job’s brilliant job with the PR and the media’s love of convergence will make an iPhone a must have for some early adopters and elites.

But shortly after the launch the initial hype will wear off and Steve will move on to the next project at Apple. Then the iPhone will end up in the convergence scrap heap along with the ROKR, N-Gage, WebTv and many others.

Initially convergence products, like line extensions get attention and generate early sales. But long term they usually fail and always undermine the brand.