The way to exploit a new mass medium like the Internet is by launching a new brand with a new name. Not by dragging an old brand into the new medium. Yet time and again companies make this classic error.

Why can’t the kings of yesterday’s technology reign supreme in a new kingdom?

Because, a new brand has greater authenticity and the freedom to adapt itself better to suit the new medium.

If you study the history this is exactly what has happened over and over again.

Brands that have made it big on the Internet are brands focused on and built exclusively for the medium: Yahoo!, eBay, Amazon, Google, You Tube, My Space and Monster.

Look at celebrity gossip, many people’s favorite secret pastime and one I can’t get through a Stairmaster cardio session without.

Over the years celebrity gossip has seen a different brand leader for each new medium.

For almost every category it’s the same story. A new mass medium brings new leaders. Rarely does the old guard survive the new world order. And if they do survive, it is usually only short lived. Sooner or later a focused competitor comes along and knocks them off their throne. 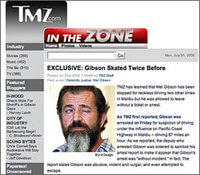 That is exactly what TMZ has done in the celebrity gossip category. In just a little over a year TMZ.com has become the leader in the category beating out old-guard heavy hitters like People.com, E! Online and Entertainment Weekly’s portal. With a short, unique name and Harvey Levin, a PR savy managing editor and spokesperson, TMZ has arrived and become king of celebrity gossip on the Internet.

So if you have a successful television, newspaper or magazine brand and are thinking of transferring it to the Internet, think again. Go ahead and build an Internet site, but give your site a new name and a new brand identity.

And if you are a start-up looking to build an Internet brand and are fearful of competing with offline brands with more resources than you can imagine, fear not. Have faith that small focused brands can become the David that slays the Goliaths. Look at TMZ for proof.