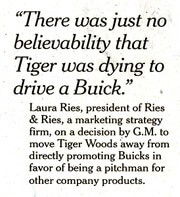 Celebrity endorsements remain a popular tool for marketers. But too many times brands use the wrong celebrities.

Tiger Woods endorsing the Buick brand makes no sense at all. There is just no believability that Tiger is dying to drive a Buick. And without believability a celebrity endorsement is worthless. The $40 million General Motors reportedly paid Tiger for his 5-year contract ending in 2009 is not money well spent.

The Buick/Woods example is the extreme of what not to do when choosing a celebrity. There was no believability; Tiger is overused and Tiger is too expensive.

The brand personalities of Buick and Tiger go together like oil and water. Buick is an older person’s car (Tiger is less than half the age of the average buyer.) Tiger is very young, very cool and at the top of his game. You imagine him driving a Bentley, a Mercedes or a Lexus.

Never in a million years would anyone imagine Tiger saying to his hot Swedish-model-wife “Hey Honey, let’s go get a Buick!” It was even worse when General Motors signed Tiger back in 1999. Then he was a cool, single guy in his 20’s. No guy ever got a date by driving around in a Buick.

If anything, it would have been a better idea for G.M. sign up Tiger’s dad, Earl Woods, as the celebrity endorser for Buick. At least he would be more of a believable Buick buyer but unfortunately it is too late for that since he sadly passed away last year.

There are times when a celebrity endorsement makes sense and can be tremendously helpful. Think Michael Jordan and Nike or Gatorade. Or Kristie Alley and Jenny Craig.

Here are the answers to some common questions to help you to decide if a celebrity is right for your brand.

How can a celebrity endorsement help my brand?

Having a celebrity endorse your brand can be helpful for a well-known brand in need of maintaining attention for its brand and category. Celebrities are most helpful because they can star in advertising campaigns and participate in company events. Consumers might be more apt to watch your ad if it has a celebrity. Employees might feel proud of having the celebrity endorsing their company. Customers might be more apt to participate in events when a celebrity involved.

A celebrity is not a replacement for an idea. A brand without a focus will never find the correct celebrity to match the brand.

Using a celebrity is also not a replacement for brand PR. Too many companies use a celebrity in an attempt to establish credibility with consumers. But the only thing that builds a brand in the mind of the consumer is PR and word-of-mouth generated by an idea. The PR attention generated by a celebrity does not build your brand.

People might talk about the celebrity but that rarely translates into much for the brand. The bottom line is that the only thing that makes a brand successful is owning a word in the mind. Paying Tiger Woods millions of dollars is no replacement for that.

When do celebrity endorsements work?

Celebrity endorsements only work when the consumer has a credible belief that the celebrity would be interested in buying and using your product or service despite being paid to do so. If not, your money is wasted on the endorsement. You can have any actor deliver your sales pitch. The celebrity might even be a distraction from your message.

Celebrity endorsements work best when you can line up a celebrity with as much exclusivity as possible. Athletes in their prime usually have endorsements with so many different brands that each has limited influence. Look at the cars of NASCAR drivers. Unless your name fills the whole car, forget it. All the little names get lost and ignored.

Celebrity endorsements work best when the celebrity is believable. Seems obvious, but many celebrities have the reputation for saying anything for a buck. This is compounded by having multiple contracts that are short-term and change frequently.

Celebrity endorsements work best if the celebrity is not too famous. Celebrities that are too famous and too much in the public eye are not as effective. They tend to overshadow the brands in the advertising. And consumers are fatigued of seeing the celebrities’s face all over the place.

Celebrity endorsements work best if you think long-term. Having a new celebrity ever few years doesn’t make sense. Consistency is key. Some brands associated with youth and fashion will have a higher turnover rate. But most brands should think about a partnership of five years or more.

Are celebrity endorsements worth the money?

A big, established, dominate brand has the money and weight to make a celebrity endorsement work. It’s usually a brand that consumers are familiar with and the exorbitant costs can be worthwhile in defending the brand’s position in the mind and keeping the category relevant and interesting.

Celebrity endorsements are usually not a wise choice for new brands with limited budgets. Better to use PR and a company leader as a spokesperson to build the brand first.

What if the celebrity gets in trouble?

The recent PR disasters with Martha Stewart, Kobe Bryant, Mel Gibson, Paris Hilton and others makes many companies extremely nervous about signing up a celebrity.

People are fallible. Even Ms. Perfect (aka Martha Stewart) can suffer a fall from grace. But having a singular person as the spokesperson for your brand, whether it is a CEO like Steve Jobs or a celebrity like Tiger Woods, is extremely beneficial and so important in a brand’s success that is worth the risk. And if the worst happens, just be consoled that strong brands tend to survive regardless.

Some of the worst celebrity endorsement choices: (Please post a comment with some of your favorites, too)

Michael Jordan and Rayovac rechargeable batteries.
I think he can afford to buy the real ones and throw them away. Don’t you?

Michael Jordan and Hanes underwear.
Boxers or briefs? Neither. I am guessing Jordan would go commando rather than wear such stodgy drawers.

Paris Hilton and Carl’s Jr.
Stuffing her face with fast-food burgers, I don’t think so. The only thing this heiress indulgences in is champagne, clothes and cosmetics.

Fidelity and Paul McCartney.
When you have billions, who needs to worry about retirement planning?

Jessica Simpson and Pizza Hut.
The overexposed Simpson is definitely cheesy but popping cheesy bites from Pizza Hut is far from believable