If we can’t beat ’em, we’ll join ’em and other bad ideas 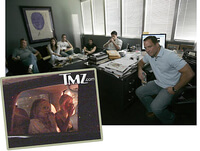 Some branding strategies are just plain crazy. Two crazy strategies that are making the rounds in boardrooms across the county are:

If they take mine, we’ll take theirs.

Are you kidding me, what are we on the playground in first grade again? You should not run a company like a six-year old. You need to stand tall, stay focused and remain true to your brand.

TMZ.com is brilliant because it owns online celebrity gossip. Without a magazine to sell or a television show to promote, it has been able to focus on delivering breaking news fast. Managing editor Harvey Levin is a terrific spokesperson and appears frequently on all the major news channels.

TMZ was first with some of the most important celebrity stories of our time, like Mel Gibson’s arrest and rant. Since news reports from the frontlines of the Paris, Lindsey and Britney theaters seems to captive consumers around the globe business is booming.

Most of TMZ competition comes from line-extensions of television and magazine brands. People.com, ET.com, Extra.com, USWeekly.com, etc. They have moved into TMZ turf and have aggressively gone after its audience.

To stay on top, TMZ.com needs to reinforce and extend its breaking news advantage over the competition. TMZ puts up new posts almost continuously 24/7. They don’t need to hold back any exclusives for a magazine or television show; they go live immediately.

So what does TMZ do next? If they take mine, we’ll take theirs. TMZ is launching a television show.

What? Yup, you heard right. All those gossip magazines and celebrity television shows are launching websites and trying to steal our traffic, so we’ll go on TV and take their viewers away and see how they like it.

What a dumb move. It undermines the power of the brand, weakens the strength of its focus and dilutes the meaning of TMZ in the consumer’s mind.

Folgers, the leading coffee brand in the U.S., has seen its sales and market share fall dramatically over the years as everyone upgrades their coffee experience. Call it the Starbucks effect. Consumers have gotten used to being spoiled with $3 lattes and can’t seem to stomach that stodgy and bland Folgers brew from the can at home anymore.

If expensive coffee is what people want to buy by golly that is what we’ll give them. No use in fighting Starbucks and its $12-a-pound coffee, we’ll just launch our own.

That might have been a fine idea, if Folgers did it 15 years ago with a new brand name. (Shultz purchased Starbucks in 1987 and started expanding across the country immediately. It is not as if expensive coffee took off overnight.)

Blame it on Starbucks again. McDonald’s is feeling the heat from the upscale coffee shop so it tried to raise the bar on its own brew. But if you want premium coffee, you don’t want it from McDonald’s. Better to stick to the hamburgers and happy meals.

I have yet to figure out with this strange product with the long name is all about. I saw one at the gas station and had to check it out. I asked the guy behind the counter what it was and he looked even more baffled than me!

Forget the fact that the stuff didn’t taste very good. Actually many times taste is irrelevant. Red Bull is not terribly tasty and tests show Pepsi tastes better than Coke.

The real problem is that Diet Pepsi Max has no message. Invigorating cola is unlikely to be a tangible new category any time soon.

My best guess is that Pepsi is feeling the competition from energy drinks and launched Diet Pepsi Max to try and join the party. The ingredients list caffeine and ginseng. It’s about as good idea as adding vitamins to Diet Coke, (Diet Coke Plus.)

Apparently, the breakfast of champions isn’t enough for athletes anymore. They also need a Wheaties multivitamin.

Isn’t the advantage of Wheaties that it delivers your vitamins, minerals and fiber all in a nutritious cereal? What no need for breakfast anymore; just pop a pill instead? Not a good message for Wheaties to be sending.

The enemy of fortified cereals are vitamins. Cereals, especially Wheaties, needs to emphasized the importance of starting the day with a healthy breakfast full of vitamins, fiber, protein and carbohydrates. Popping vitamins an alternative to that.

OK, Snapple has a big success in bottled iced tea. And I’m sure they are pretty peeved that Lipton has come in with a very successful line of Green and White bottled teas. So Snapple’s response seems to be, well we’ll just launch tea bags and see how Lipton likes that.

If they take mine, we’ll take theirs. Not a very mature or wise branding strategy.

Totally insane. Yes, organic and natural are the big buzz words in food today. But you can’t just stick them on any brand and think it will work. Organic Cheetos isn’t too bright either. What is next, organic SPAM?

If you can’t beat your competition, you can’t join them. Trying to force your brand into a position already owned by a competitor is not only foolish but undermines your existing brand by reinforcing the negatives of your position.

If competition moves into your category, deal with it. Success always brings competition. Don’t be territorial and try to move into your competition’s market, especially when it represents a declining market.