Change is the word

Like the Olympics, every four years we are treated to a sport known as the U.S. Presidential election. With the politicians, as with the Olympians: “You don’t win Silver; you lose Gold,” as the famous Nike ads said.

In politics, second place is no place. In business, it’s different, so while Pepsi might have a nice business in second place, John Kerry’s second place finish sent him home with his tail between his legs.

Like athletes, politicians spend years preparing for the big day. They spend every dollar they can find, and work every hour they can stay awake, towards achieving their goal. Both live in fear that a tenth-of-a-second slip-up, a gaffe in a debate or a photo of Donna Rice on your lap can instantly erase a lifetime of work.

So what is up with the 2008 Presidential race?

This year we have a wide-open race on both sides of the aisle. It has been years since an incumbent President or former Vice-President has not been in the race. Therefore we have lots of candidates jumping into the ring from both the Republican and Democratic parties. The wide open field has made for a brutal primary season with candidates on both sides getting hammered by their own people. So much so that Democratic candidate Bill Richardson joked during Saturday’s debate that he’s “been in hostage negotiations that are a lot more civil than this.”

In any election there are two battles that are fought. One internal party battle and one general election battle. If knowing the enemy and positioning yourself against the enemy is the key to success, than this system is counter-productive in building a strong brand. The best primary message is different and the opposite of the best general-election message because the enemy is so different.

In politics, owing the right word in the mind is the key to success. That’s right, politicians are brands just like soap and cars and should be treated that way. Sure, running a country is more complicated than washing your hands with a bar of soap and there are vast policy platforms and such, but the most successful politicians have succeeded because they own a word in the mind.

And some of the most unsuccessful politicians have been undermined by owning a word, too. Owning the wrong word is a killer.

What word does Hillary own?

Hillary owns Clinton in the mind. For better and for worse Bill & Hillary are locked together in the mind.

But it is Hillary Clinton that is running for office now and simply being married to Bill Clinton is not going to fill the ballot. To win she needs to stand on her own ideas while having Bill close by.

So for years campaign advisors have been crafting a message for Hillary. And the centerpiece of that strategy is the message of “experience.” Perhaps worried about Hillary’s brief resume in elected office, her advisors have heavily emphasized and inflated her years of experience. Of course, most of her experience comes from her time spent as First Lady in Little Rock, Arkansas, and Washington DC.

My husband is with Accenture and we have been married ten years, but I don’t think that they would make me a partner and give me his job. Attending dinners and hearing about his day only goes so far in bestowing experience.

With the Iraq War quagmire and 20 years of Bush-Clinton-Bush, the one thing most Americans are looking for today is change. So Hillary’s focus on “experience” is now coming back to bite her. She went after the wrong word in the mind. And now she is desperate to jump on the “change” bandwagon.

Can Hillary change to “change”?

Hillary might be able to tweak her word, but she definitely can’t change to a word that is already owned by the competition.

A brand that focuses on an idea and gets into the mind first will own that word no matter what the competition does. Volvo owns safety. Toyota, Ford and Honda spent millions advertising safety but it is all for naught, because Volvo owns “safety” and nobody can take it away from them.

Perhaps Hillary could have owned change. If she hadn’t spent months promoting “experience.” But today it is too late because Barack Obama has pre-empted the idea in the mind. When it comes to “change” Obama is the real-thing candidate. 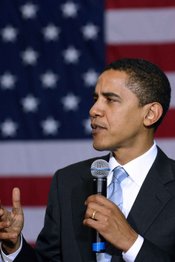 Change, Obama and the bandwagon.

Fresh-faced Barack Obama has sailed into this Presidential race a total newcomer. An overnight sensation with rock-star charisma, Obama without a doubt represents change on many levels.

The key is jumping on the right trend first and sticking with it. Since campaigns are crafted months in advance, it is not always easy to predict what will work. Not to mention the candidate has to have the credibility, authenticity and track record supporting the idea to make it stick. Obama was the right guy at the right time and his brand is surging.

Since change has become the buzzword of the campaign, everybody is now jumping on it.

After the results came in from Iowa, change was the talk of the town. All the major candidates sprinkled the word heavily into their rhetoric during their post-caucus speeches. Clinton used change 4 times. Obama 6 times. Edwards 9 times. Huckabee 7 times. Romney 3 times.

The other candidates can use the word change all they want. It doesn’t matter. When it comes to change Obama is the real-thing in the mind. It is like when Honda advertised safety, consumers thought. Yeah safety is important, we should go buy a Volvo.

Safety wasn’t always in fashion and might not be in fashion in the future. With change it is the same way. But today I think change will be the key to success because of the frustration with the current policies of George Bush.

So what Hillary and others at first assumed was Obama’s most distinct disadvantage has become his greatest asset. An inexperienced outsider seeking change may be just what Washington needs most to shake things up.

For more on politics and marketing, check out my latest Ries Report.