Not your father’s Xerox

After a brand overhaul that was two years in the making, Xerox unveiled a new look last week. Xerox worked with Interbrand to modernize its brand to reflect its expansion beyond copiers. In other words to show that “Xerox is not your father’s Xerox anymore.”

Xerox built one of the most powerful and most recognizable brand names in the world. Let’s take a look at the early history of the company to see how being first and two wise name changes were integral to its success.

1935: Haloid buys the license for electrophotography (and renames it xerography from the ancient Greek words for “dry” and “writing”)

1949: Haloid commercializes xerography with the Model A copier.

1962 – and beyond: The Xerox brand name becomes synonymous with making copies and dominates the fast growing category.

There are not many companies listed both on the New York Stock Exchange as well as in the Webster’s dictionary. Xerox is not just a company but a verb meaning to make a copy even if it happens on a Canon machine. It is a virtue of the power of the name, being first in the mind and owning the category.

When the copy machine was the centerpiece of every office, owning “copier” in the mind brought Xerox great wealth and fame. But today much has changed. Today, the copier category is no longer on the rise but in decline in both size and more importantly importance.

It is a similar situation to the one facing Kodak. Kodak was once one of the most powerful brands in the world but not anymore. Not because Kodak did anything wrong but because the category that it owned (conventional photography) is fading away. When your category dies do does your brand. There is nothing you can do about it. The best you can do is ride it out and launch new brands for the future.

This is not something Xerox is doing. While they have been successful in finding new business by expanding into printers and scanners as well as document management software and consulting services. The company is not being helped by clinging to the Xerox name. The Xerox name hurts more than helps the company in the new areas it enters.

Why? Credibility. When a brand is so well-known and so closely associated with one category, so much so that it is the generic word for that category, you can’t change its meaning in the mind. Using lowercase letters and a big red ball is going to change nothing. The first thing that comes to mind when you hear or see “Xerox” is “Copier.”

Xerox has tried for years to move beyond copiers without much luck. As far back at the 1960s, cash from copiers has fuelled some crazy acquisition sprees in an attempt to expand the company beyond copiers.

So what should Xerox do? The same thing Xerox should have been doing back in the 1960s, launching new brands instead of trying to expand the meaning of the Xerox brand which time and time again has proven to be very difficult, very expensive, and not very profitable.

If you don’t have a strong and credible brand in a category you are forced to sell on price. And when you sell on price you don’t make much profit. Keeping the Xerox name on copiers makes sense; Xerox gets a premium for its copier brand. But the company should use a new name on everything else. It is going to be hard to do today, it should have been done years ago. But companies at their peak rarely want to plan for retirement. 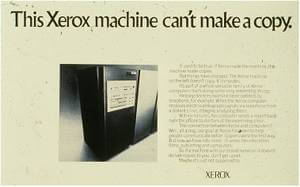 The headline of a famous advertisement for Xerox computers proudly stated “This Xerox machine can’t make a copy.” The text went on to explain how things have changed, “so if a machine with our brand name on it doesn’t deliver copies to you, don’t get upset. Maybe it’s just not supposed to.”