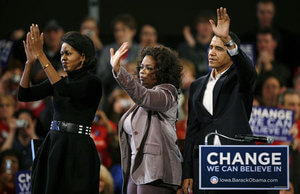 Are celebrity endorsements good or bad for candidates?

Good because if everyone, including celebrities, is endorsing a candidate it enhances his or her appearance as the leader and a winner. And everybody loves to jump on the bandwagon of a winner. A winner is presumed to be on the side of truth, righteousness and justice.

Bad because too many times the celebrity overshadows the candidate. In order to win, the candidate needs to be the real celebrity. A candidate cannot win by association.

That’s Hillary Clinton’s biggest problem. Bill Clinton is a major celebrity and is overshadowing her. And when Bill is around Hillary is put in the position of playing second fiddle. The more Bill campaigns for Hillary the worse things get for Hillary.

When George W. Bush ran for president, his dad, the former President, was nowhere to be seen. And that was a good thing. It allowed George W. to shine on his own without being overshadowed by his father. Believe me it sucks to be upstaged by your dad on stage.

The brilliance of Obama is not that he gets a lot celebrity endorsements. It is the opposite. Obama is the rock star, Obama is the celebrity. Obama doesn’t need celebrities to get people to come to his rallies. People are filling football stadiums just to see the guy.

Early on, Obama had to be careful not to take on too many endorsement. I think the Oprah endorsement came at the right time with just the right amount of attention. When Oprah endorsed Obama, hewas already a star in his own right. He had a message and momentum.

Of course, Oprah greatly helped him, but she didn’t make him and that is a key difference. Oprah also doesn’t hover over Obama all the time. If Oprah travelled around with Obama like Chuck Norris does with Huckabee, it would be equally as creepy.

Many celebrities bring more baggage than benefits. Many are usually quite polarizing or flaky. Being pretty and being in the movies aren’t exactly stellar credentials for giving opinions on national policy. If Sean Penn called to endorse my candidacy, I would hang up immediately.

Why do celebrities do endorsements? PR. Celebrities are in the business of selling themselves and what better way to get their names in the paper than to talk politics.

Endorsements don’t mean everything. Both Al Gore in 2000 and John Kerry in 2004 had most of the celebrity and media endorsements, but that didn’t help either win. Why? Because neither Gore nor Kerry was a celebrity themselves. In order to win the White House, the candidate has to be the biggest name on the stage, in the media, in the mind and on the ballot.

Here are my comments on some recent celebrity endorsements:

Oprah Winfrey for Obama. Obama rally at UCLA.
“So I say I am not a traitor (to my gender)! No, I’m not a traitor – I’m just following my own truth. And that truth has led me to Barack Obama!” [audience cheers]

Laura on Oprah: Oprah’s remarks are well-written and well-spoken. She touches base with the negative then moves to the positive. Oprah is a one of a kind. There is nobody else like her. She is loved, respected and trusted by millions. Oprah’s strength is that she is a straight-shooter. She is down-to-earth, non-partisan and represents everyday people.

Susan Sarandon for Obama. Tavis Smiley Show/PBS.
“ Well, I’m going to back Obama. But I hope – I think that he, as a symbol, has really excited people, and he’s definitely confusing to everyone who really hates America for hating Muslims because a name like Obama and a Black man, they’re probably going to go “Oh, wait a minute – what?” It’s kind of like when you’re out on the line for freedom to have an abortion and you’re incredibly pregnant. They just can’t quite figure it out.

Laura on Susan Sarandon: Huh? Exactly the wrong way to endorse somebody. With weird remarks like these, she is certainly not helping Obama or herself. Her statements are way off message. Bringing up Muslims and abortion and people hating the U.S. is not wise.

Ted Danson for Hillary. National Press Club
“I take my hat off to Senator Clinton, to being the first woman in this situation, because there’s a double standard. I throw my shoe at the TV a lot… out of frustration you know. Two guys go at it and they’re good ol’ boys you know, giving each other a good licking, and she says something mean, man, ‘Dear God, what a terrible person she is… It’s a very strange position to be in. Luckily it doesn’t seem to phase her that much.”

Laura on Ted Danson: Does anyone care what Ted Danson has to say? I don’t think so.

Robert DeNiro for Obama. Rally at the Meadowlands.
“Barack Obama does not have the experience to be president of the United States. [audience boos] And I can prove that. Remember, he wasn’t experienced enough to vote to authorize the invasion of Iraq. … You know, that’s the kind of inexperience I could get used to.”

Laura on Robert DeNiro: He is just repeating the campaign talking points. While the points are fantastic, they didn’t need DeNiro to deliver the lines. That is the lesson of Obama. He doesn’t need celebrities because he is one, but having them in the back of his bus cheering him on is icing on the cake.

Magic Johnson for Hillary. CNN
“Well, I still go back to the experience and the expertise, and also her foreign relationships, things that she’s been doing for a long, long time, battling the health-care issue. Everybody wants health care for everybody, but you have been in that fight to understand what has been the pitfalls, why everybody doesn’t have health care. So it’s those type of things that I still think she still has the edge on Obama.”

Laura on Magic Johnson: I’m not sure people care who Magic likes to win the next NBA championship, let alone the presidency.

50 Cent for Hillary.
Reporter: Why Hillary?
50 Cent: I think she could do good job.
Reporter: Really?
50 Cent: Yeah, I mean Obama, ain’t nothing bad about Obama in my eyes either. But, I just think Hillary that would be my choice.

Laura on 50 Cents: A nothing endorsement. Not even worth 25 cents.

Whoopi Goldberg for Hillary. On The View
“So, when I went in… I had to change what I was going to do. So, I put it towards Hillary. (She changed her vote from Obama because Hillary was the first to address the issue of American jobs going overseas)

Laura on Whoopi: What does she know about jobs going overseas? Who does she think she is, Lou Dobbs? These comments are way out of her field of expertise.

What about McCain? How should McCain rebut all those democratic celebrity endorsements?

He shouldn’t. McCain should ignore them and establish his own brand and celebrity. McCain’s biggest problem is that he is well-known but doesn’t stand for any single attribute in the mind. He is a war hero and a Senate veteran. But elections are about the future not the past. Just ask Giuliani. And in this election being a Washington insider isn’t a good thing.

American politics and American Idol have a lot in common. The biggest celebrity wins. Let’s just be thankful we don’t have to hear McCain, Obama and Hillary sing.