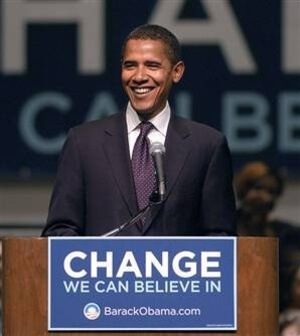 One look at the signs at a campaign rally says it all. Who will win. Who will lose.

When building a brand, words matter. And the words that matter most for a politician are the words on campaign posters and website home pages.

The candidate who has the best and most consistent words will build the strongest brand and most likely will win the election.

Politicians are certainly aware of the influence of rally signs, especially in steering media coverage when they are televised. When the President gives a speech, there will always be a sign on the podium or on the wall behind him with his key talking point. That way, even if reporters sleep through the speech or the public mutes the television, the message can be delivered. 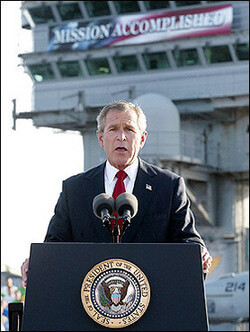 Signs can even drown out the actual message. Sometimes with unintentional and disastrous consequences. Remember President George W. Bush’s famed 2003 end-of-combat speech delivered on an aircraft carrier? On May 1, 2003, Bush flew on a Navy jet to the carrier Lincoln, where he announced “major combat operations in Iraq have ended.”

In retrospect, the speech was misguided in previewing what was to come. But the speech alone would not been as nearly as damaging without the sign behind him. Hanging behind him was a sign that said: “Mission Accomplished.”

Actually, it was a salute to the crew on the ship and not planted by Bush and his team. But that doesn’t matter. A sign is a sign and when it is behind you, you own it. 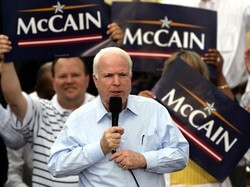 McCain is the Republican Party’s chosen candidate. He won a relatively easy battle for the nomination, not because of the strength of his message but because of the weakness of the competition. Without strong foes, a brand with no message can succeed. Bud Light may be a watered-down line extension, but without strong competition, the brand is the leader. Not good branding, just weak competition.

So far, John McCain has survived without a message, but going into the general election he won’t go far without one. If he wants to avoid being labeled as “Bush Third Term,” he’s got to start printing some good signs right away. Not an easy task, but without the right sign language, he is doomed.

What would I do for John McCain? First of all, for a message to work it has to resonate and reflect what voters already believe about a candidate. Nobody thought Hillary Clinton was “experienced,” so when she used that idea as a slogan, it fell flat.

A candidate can’t just put a word on a poster and own them. Just like a brand can’t be built by making a self-serving claim in an advertisement.

Just saying you are “experienced” doesn’t allow you to own the word in the mind. Firs, you have to establish credibility and authenticity with the idea.

Being President requires an understanding of a broad range of issues.

Becoming President requires simplicity and focus. A singular idea and a consistent message.

That’s why Bush made a great campaigner and a lousy president.

If I were running McCain’s campaign, I would focus on the word “Maverick.” He is known as a straight talker and willing to work with the opposing party. This is his best attribute. What will hurt him the most is the lack of a consistent message. Changing signs frequently is a bad strategy.

The Obama campaign demonstrates the value of having the right sign language. Barack Obama faced an uphill battle in establishing his brand. First of all, his first and last name are strange. And even worse, Obama rhymes with Osama the country’s number 1 enemy. Add to that he is black, young and new to the national stage. The wacky Reverend Wright hasn’t help him either.

When you compare Obama to Clinton, on paper she is the clear winner. She is the wife of a former and very popular and charismatic President. She is relatively new to holding a political office herself. (Being an insider with an outsider’s edge is a good thing in a campaign.) Most importantly, the Clinton machine gave her a huge head start in raising money.

Sure, she has flaws, but compared to other candidates, she was thought to be unbeatable. Early speculation was that the Republican primary would be a bloodbath and the Democratic primary would be more a Clinton coronation than a contest. How wrong they were.

Where did Clinton go wrong? It all comes down to the signs. She never had consistent sign language. I have never seen so many different and ever changing campaign slogans in my life. I complain about Coca-Cola changing taglines every year, but Clinton seemed to change her signs every day. Except for keeping the printing industry happy, her signs did little to build her brand.

In fact, her constantly changing message reminded people of one of the Clinton brand’s greatest weaknesses. A common criticism of the Clinton presidency was its constant change of strategy with every shift of the wind based on poll tracking data.

All that said, the race has been a tight one. But one I believe was definitively ended on Tuesday night. Not because of the primary results which gave one win to Obama and one to Clinton. But because of the images of each candidate’s “victory” speech. The sign language spoke loud and clear that Obama will win the nomination and Clinton will lose it. 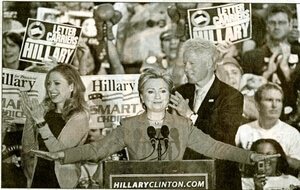 Clinton stood in front of a crowd that held just a few signs. Many were barely readable. Many had various messages and inconsistent colors. In addition, Bill Clinton was brought out to stand stoically at Hillary’s side as if he knew it was over. One readable sign said: “Smart Choice.”

Another one of my favorite of her name slogans was “Let’s make history.” Now if Clinton were running against McCain that might make an ounce of sense. But against Obama, it is just a waste of paper. Obama winning would be much more likely to make history than Hillary winning. After all she is part of a political dynasty with a former President to back her up.

In North Carolina, Obama was brilliant. He stood tall in front of a sea of supporters all holding the same sign, with the same message, in the same colors. “CHANGE we can believe in.” Powerful stuff. Of course, his speech was incredible, but what clinched it was the sign.