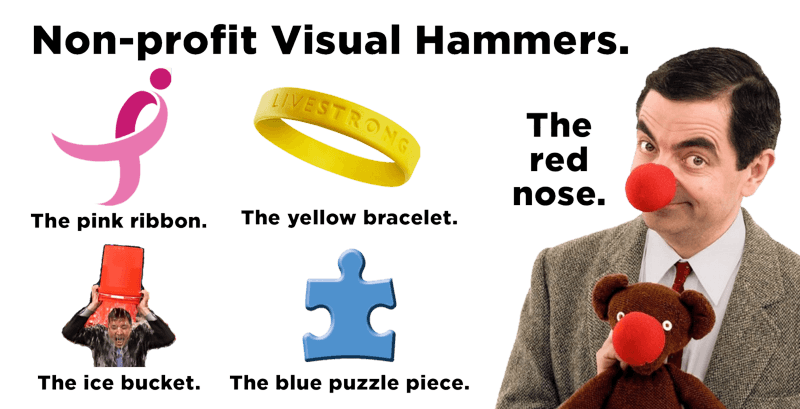 What can a red nose do?

What can a red nose do? It can build a brand. A red nose is the visual hammer for Red Nose Day, a campaign started in the U.K. and has now moved into America. The Red Nose Day fund is a program of Comic Relief, a non-profit that raises money for children living in poverty. Hundreds of charities do similar work, but most don’t become as well-known or raise as much money. The difference? A visual hammer that drives the brand into the mind. It might be a simple or silly thing like a pink ribbon, a yellow bracelet or a red nose. Three visuals that have built powerful, relatively-new non-profit giants. Many non-profits try to do too much for too many people. The best way to affect change is to focus on one issue or one disease or one disability. When you have a broad mission like the United Way, it is difficult to communicate what you do and it is hard to find one visual or slogan that can cover all that you do. The United Way survives because it is 125 years old. You could not build that kind of general charity today. Today, you need to be focused in your mission and your name. Take Livestrong. With people living longer and surviving a cancer diagnosis, Livestrong’s mission wasn’t curing cancer like many other charities. Its mission was to support and improve the lives of people fighting and living with cancer.

In addition to being focused, it is also useful to be specific. Most vision statements of charities are too broad. “To create a just world, free from poverty,” for example. What does that mean? How can you visualize that? You can’t. That is why a more-specific campaign for Comic Relief is so successful. Red Nose Day uses a clown nose, a comedy show and humor to raise money to help people in poverty.

Me-too products don’t work, and me-too campaigns don’t work either. After the success of the pink ribbon for Susan G. Komen for the Cure, many charities picked a color and started wearing ribbons. Do you remember them? No. They weren’t first. After the yellow Livestrong bracelets built the Livestrong brand, many charities made bracelets by the millions to wear. Do you link any other bracelet to a cause? Didn’t think so. After the ice-bucket challenge raised over $100 million dollars last summer, many charities tried to think of a challenge. There was the egg challenge and the lime challenge. Will they get noticed? Probably not.

Instead of copying what has already been done and trying to do it better, it is important to find something you can be first in. Don’t use the same visual in a different color, create a new visual.

One of my favorite visual hammers is the puzzle piece for Autism Speaks. It communicates the essence of the issue. Many autistic children are not verbal, so the name itself is specific and serves as a double-entendre. Couple that with the tagline, It’s time to listen.

Whether you want to go on Shark Tank and become a millionaire or want to go out and save the world, the way you do it is the same. You need to get in the minds of consumers. To get into minds you need to focus on one idea. That idea needs to be visualized with a visual hammer that can drive your brand name into consumers’ minds.