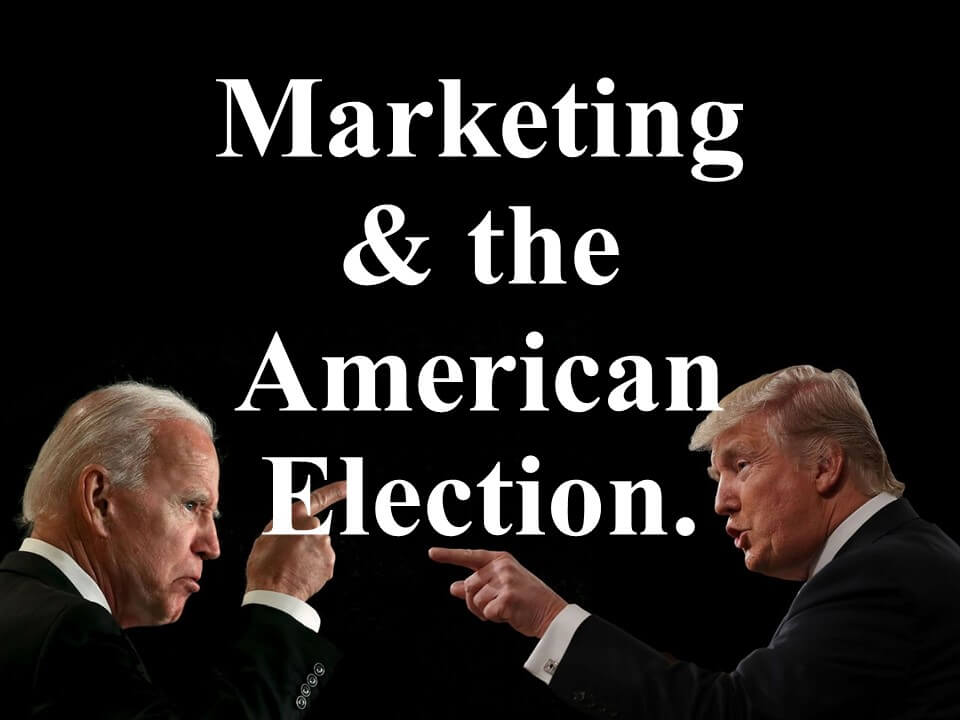 Marketing and the American election.

Why did Donald Trump win in 2016 and lose in 2020? You can answer that question in a single word.

And things are going poorly in America. There are more than 100,000 new corona virus cases every day and deaths now total 243,811.

There are more cases in America every day than there were in China since the first of the year (86,245 cases.)

Each of the 50 states in America has a certain number of electoral votes, depending on its population. Some of the larger states have a high percentage of Democratic voters.

California, for example, is the largest state in America. In the 2020 election, 65 percent of the voters in California voted for Joe Biden. If you are a Republican living in California, why would you bother to vote for Donald Trump. He didn’t have a chance.

The power of a single idea.

Why did Donald Trump do well when the country was doing so poorly?

You build brands by focusing your entire marketing program on a single idea. BMW became the world’s leading luxury-vehicle brand by focusing on “driving.”

Starbucks became the world’s leading coffee chain by focusing on “expensive.” Coffee at Starbucks in America is typically three times as expensive as coffee at other coffee shops. Today, there are more Starbucks coffee shops in America than there are McDonald’s restaurants.

Samsung became the world’s leading smartphone brand by being first to introduce a larger-size phone.

In the year 2011, Samsung marketed a smartphone with a 5.3-inch screen while Apple smartphones had only 3.5-inch screens.

It took Apple three years to catch up to Samsung, but by then it was too late. Since 2012, Samsung has been the world’s leading smartphone brand

Donald Trump won the election in 2016 with the slogan Make America Great Again.
It appealed to everyone who thought the country could do better. Also, the slogan was memorable because it rhymed. (Make and Great.)

What was Hillary Clinton’s slogan in 2016? Actually, she had three slogans.

To the average person, none of these slogans meant anything. Unless you have a strong, powerful conceptual idea, you cannot win an election with an opponent that does have one.

What was Joe Biden’s slogan in 2020? Build Back Better.

Although the words are alliterative, they had no real meaning to the average person. What did resonate with the average person was Biden’s claim to do something about the coronavirus problem. That idea should have been the focus of his entire campaign.

The law of duality.

Would a third party which nominated a well-known personality have a chance of winning a Presidential election?

Probably not. In the 58 Presidential elections since the year 1788, no third-party candidate has even won a national election for President.

That’s also what happens in marketing. In the long-term, every category is eventually dominated by two major brands.

On the global market, Coca-Cola and Pepsi-Cola dominate the cola category. Boeing and Airbus dominate the passenger-airplane category.

Every category starts with dozens of brands. After the introduction of Red Bull, there were more than 1,000 brands of energy drinks launched in America.

But today, two brands (Red Bull and Monster) have 80 percent of the market. In the future, that percentage is likely to increase.

The leading brand is usually the first brand into a new category. Red Bull, for example. But what about the second brand?

After the launch of Coca-Cola, there were hundreds of cola brands introduced in America. What made Pepsi-Cola the No.2 brand?

Why does almost every new category eventually become dominated by two major brands?

If you don’t like one political party, you can always vote for the other one.

The law of PR.

Who usually wins in a Presidential race? The candidate that gets the most publicity in the media. That’s why in a political campaign it’s important to generate controversy.

Donald Trump did this with the help of Twitter.com. So far this year, he has sent more than 10,000 Tweets or Retweets.

This massive number of Tweets has generated an enormous amount of publicity. Mostly negative. But it doesn’t matter. The candidate with the most mentions in the media normally wins.

It didn’t happen this year, although the election was very close. The coronavirus decided the winner, not the two candidates.

But what does win, more often than not, is the better marketing strategy.